How To Throw a Nora Ephron Party For Your Reading Group 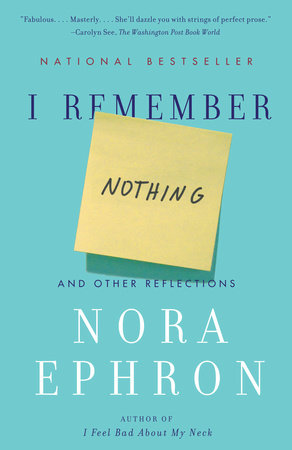 Nora Ephron’s latest book of essays, I Remember Nothing, is not only a hilarious collection of insights and observations, it’s also an excellent guide for those looking to throw a great party. Although the book may not include a step-by-step party planning guide, it does feature plenty of wisdom about engaging in polite social behavior, keeping one’s head on straight, and (most importantly) making good food. Sounds like a party to us! We’ve collected some of our favorite tips and tricks below.

Tip #1: Have a camera handy to document the party. After all, no one’s getting any younger. “I have been forgetting things for years,” says Nora. “I should have kept a journal. I should have saved the love letters…. But I didn’t. And sometimes I’m forced to conclude that I remember nothing.” So take photos of your party—and save them.

Tip #2: Make your guests a perfect egg salad! Don’t skimp on the yolks. They make it better, not worse. Nora offers her favorite recipe: “Boil eighteen eggs, peel them, and send six of the egg whites to friends in California who persist in thinking that egg whites matter in any way. Chop the remaining twelve eggs and six yolks coarsely with a knife, and add Hellmann’s mayonnaise and salt and pepper to taste.”

Tip #4: Avoid any discussions on subjects that no one really knows anything about, particularly if everyone thinks they know a little something about said subjects. Subjects like the Internet. “It’s not easy to be wrong about the Internet—the Internet consists of pretty much everything in the universe,” notes Nora. “So pretty much anything you say about it is going to turn out to be partly true in some way or another. Nontheless, it turns out not to be.” Point taken. Save your guests the embarrassment of being wrong and steer clear.

Tip #5: Don’t screw it up. Don’t invite the wrong people or serve the wrong food or say the wrong thing, at all. Because—let’s be honest—you’ll never forget your failures. Speaking on the subject of her career “flops,” Nora takes to task all those who believe that success can spring from failure. “I wish that were true,” she says. “It seems to me the main thing you learn form a failure is that it’s entirely possible you will have another failure.”

Hm. All this talk about failure’s got us nervous. Maybe it’s easier not to have a party at all. Perhaps it’s best you keep it simple: read I Remember Nothing with your book club, and gather at the usual spot to discuss it. Quietly, no funny business. Download our free reading group guide to assist you. And good luck.