Robert A. Caro's Next Book on Lyndon Johnson, The Passage of Power, to be Published by Knopf in May 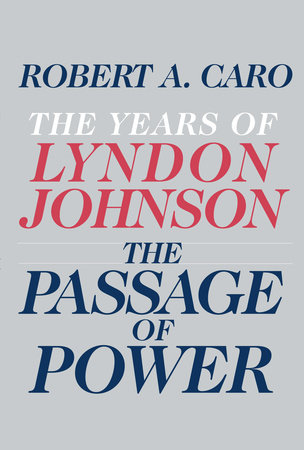 The eagerly anticipated fourth volume in Robert A. Caro’s award-winning and best-selling “The Years of Lyndon Johnson” biography will be published next May, it was announced today by Sonny Mehta, Chairman and Editor in Chief of Knopf.

“This is the work of a great biographer writing at the very height of his powers,” Mehta said. “When I read the manuscript, I knew we had to publish this new book as quickly as possible. It is a riveting look at a pivotal period in our nation’s history – told for the first time as only Caro is capable of doing. His research is peerless; his knowledge of history exceptional; and his gifts for telling a story unrivaled. This book will be hailed as one of his finest works.”

The Passage of Power continues the story told in Master of the Senate (2002), Means of Ascent (1990), and The Path to Power (1982) – books that have been honored with a National Book Award, a Pulitzer Prize, and two awards from the National Book Critics Circle. Collectively, they have sold one and a half million copies, and the last two were #1 New York Times best sellers.

In The Passage of Power, Caro focuses on five crucial years in the life of Lyndon Johnson – from late 1958 when he began campaigning for the presidency, to early 1964, after he was thrust into office following the assassination of John F. Kennedy. Based on interviews with primary sources and on thousands of original documents, Caro describes the volatile relations between Johnson and John F. Kennedy and his brother Robert. He writes of the years of frustration and humiliation Johnson endured as vice president. He tells the story of the Kennedy assassination from the viewpoint of Lyndon Johnson. And he shows how this master of politics grasped the reins of power in a time of great crisis and immediately took command with unprecedented skill – and extraordinary results.

“For almost three decades,” Mehta said, “Robert Caro has been working on one of the most iconic biographies of our time. The result has been three signature works, and now this fourth, a breathtaking work of history. There will be a fifth volume, though we have no timetable for it yet, only the expectation that it will be as remarkable as the first four.”

Knopf has set a first printing of 300,000 copies for The Passage of Power; it will also be published as an eBook. Master of the Senate, the most recent volume in the series, is already available as an eBook. On November 23, the first two volumes, Means of Ascent and The Path to Power, will be published as eBooks, marking the first time all of the existing volumes in Caro’s epic biography will be available in digital format.