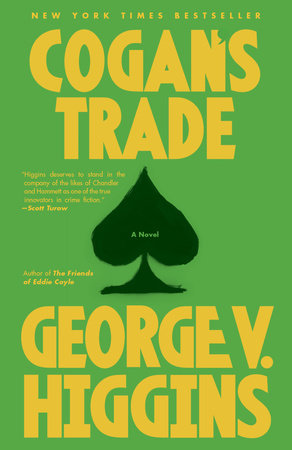 Cogan’s Trade, by George V. Higgins, is a hard-hitting, tour-de force tale of the mob and the man who makes sure their rules are the only rules. Available now in paperback, the book is soon to be a major motion picture starring Brad Pitt, Ray Liotta, and James Gandolfini. The movie will be written and directed by Andrew Dominik, director of The Assassination of Jesse James by the Coward Robert Ford and Chopper.

The book tells the story of Jackie Cogan, an enforcer for the New England mob. When a high-stakes card game is heisted by unknown hoodlums, Cogan is called in to “handle” the problem. Moving expertly and ruthlessly among a variety of criminal hacks, hangers-on, and bigger-time crooks—a classic cast of misfits animated by Higgins’s hilarious, cracklingly authentic dialogue—Cogan gets to the root of the problem. Author Higgins wrote more than twenty novels, including bestsellers Cogan’s Trade, The Friends of Eddie Coyle, The Rat on Fire, and The Digger’s Game. Vintage Books will publish The Rat on Fire and The Diggers Game in new paperback editions in 2012.

The film adaptation of Cogan’s Trade is currently slated for release in 2012. Click to see an early still from the movie at Slashfilm.