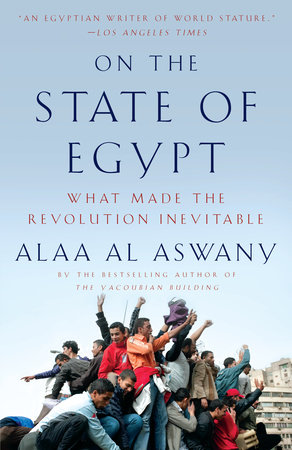 Foreign Policy magazine has released their 2011 Global Thinkers list, and at the top of the list is Vintage Anchor author Alaa al-Aswany. He shares that spot with thirteen other activists, leaders, and everyday citizens—all “brave individuals who are helping bring democracy to the middle east.”

Also by Alaa al-Aswany:
On the State of Egypt
What Made the Revolution Inevitable

In addition to being an acclaimed novelist, Alaa al-Aswany has written one of the most insightful analyses of Egyptian society, examining all the most urgent issues—economic stagnation, police brutality, poverty, the harassment of women and of the Christian minority, to name a few—that led to the stunning overthrow of the Mubarak government. Al-Aswany addresses himself to all the questions being asked within Egypt and beyond: who will be the next president, and how will he be chosen in a land where heretofore only simpletons, opportunists and stooges involved themselves with elections? What role will the Muslim Brotherhood play? How can democratic reforms be effected among a people used to such contradictions as the religiously observant policeman who commits torture? In a candid and controversial assessment of both the potential and limitations that will determine his country’s future, Al-Aswany reveals why the revolt that surprised the world was destined to happen.

Browse the table of contents, and buy your copy in paperback or ebook.