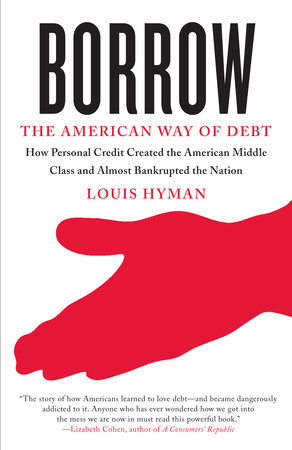 Borrow is a lively history of consumer debt in America that demonstrates how the rise of consumer borrowing—virtually unknown before the twentieth century—has altered our culture and economy. Economic historian Louis Hyman gives a historical perspective on economic turmoil, demonstrating that today’s problems are not as new as we think. Hyman recently contributed “A Brief History of Debt” to the Huffington Post as well as an Op-Ed for the New York Daily News that discusses how budgets can lull consumers into a false sense of security. He was also interviewed by Salon and appeared on NPR’s The Roundtable.

“Informed and articulate…. An essential story of the American economy…. [Hyman] comprehensively examines the role of debt in shaping the American economy, as well as the rise and recent precipitous decline of the nation’s middle class…. A critical academic investigation into an obscure arena of American historiography that has largely been neglected. But it is also an accessible story concerning a timely economic reality of today’s American experience.”
—Newark Star-Ledger

“We learn from historian Hyman that when debt became a commodity to be bought and sold, it enabled the growth of the twentieth-century economy. Americans increasingly relied on expected future income from wages rather than cash to make consumer purchases. The author traces consumer debt beginning in the 1910s and through the 1920s, when personal loans became legal and mortgages were in demand…. This is an excellent book.”
—Booklist

“Intelligently analyzing both the economics and the social meaning of debt, Hyman grounds these developments in commercial imperatives and an evolving consumer culture, and links them to deeper economic upheavals…. Stocked with colorful personalities and trenchant insights, Hyman’s lucid, entertaining, and timely treatise illuminates the murky processes by which debt became the troubled center of economic life.”
—Publishers Weekly