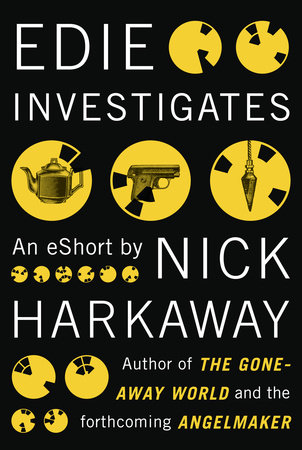 From the author of The Gone-Away World and the forthcoming Angelmaker—an exhilarating espionage murder-mystery eShort.

There has been a strange death in the quiet village of Shrewton: old Donny Caspian has lost his head. In the Copper Kettle tea rooms, Tom Rice, a junior nobody from the Treasury, puzzles over the details of the case. He has been sent by his superiors to oversee the investigation, but is he supposed to help or hinder? At the next table, octogenarian superspy Edie Banister nibbles a slice of cake and struggles not to become Miss Marple. But what is the connection between the two? Who killed Donny Caspian, and why?

Taking in Rice’s present and Edie’s daring past, from duels on shipboard to death in back alleys, “Edie Investigates” is a superb short story from the incomparable Nick Harkaway.

To get you in the mood to read this thrilling sShort, Nick has put together a Spotify playlist of tracks to accompany “Edie Investigates,” featuring The Pixies, Leonard Cohen, and more! Learn more about Knopf Doubleday on Spotify.