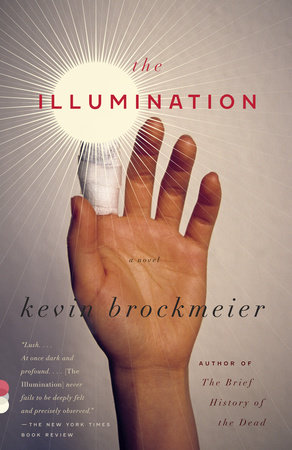 At 8:17 on a Friday night, the Illumination begins. Every wound begins to shine, every bruise to glow and shimmer. And in the aftermath of a fatal car accident, a journal of love notes, written by a husband to his wife, passes into the keeping of six people. As their stories unfold, we come to understand how intricately and brilliantly they are connected. We asked author Kevin Brockmeier to answer some of the questions in our reading group guide for The Illumination. Read on for his responses!

Reading Group Guide Question #1: Does your understanding of the Illumination change throughout the novel? Why or why not? What do you think it is, and what causes it?

I can tell you that I came to write the book after thinking about the various forms of pain people are forced to endure. I was wondering, really, what could all that suffering possibly be good for, and found myself conducting a thought experiment: What if our pain was the most beautiful thing about us? What if our pain was what made us beautiful to God? I had an image of someone literally glowing with his injuries, and this simple equation, of pain with light, gave birth to the book. Precisely what precipitates the Illumination, though, and why it occurs, remains just as mysterious to me as I imagine it does to you. Of course I would say the same thing about the real world. We might understand something about the basic ground rules of existence, but it’s my intuition that those rules could change suddenly, right under our feet, and the universe would be no more or less curious, wondrous, and outlandish than it already is. Many of my favorite books operate under a similar principle: there is a world, and it exists, and what matters is not the why of that world but the how.

RGG Question #2: Discuss the structure of The Illumination. What is the effect of dividing the book into sections? With which characters did you most identify? Why?

I tend to think in metaphors of shape, and I can tell you that the book’s shape was largely in place before I began writing it. I thought of it as something like a set of six painted transparencies, each nearly the same size and each containing its own odd abstractions of line and color, which finally, when layered one on top of the other, would reveal a single complete image. Of course, all of the novel’s characters are valuable to me for different reasons—Ryan Shifrin because he allowed me to examine a particular strain of religious thinking, for instance; Jason Williford because the book offers him so little redemption; Nina Poggione because her particular illness was essentially my own—but the one whose consciousness I most enjoyed exploring, and the one whose prose most frequently surprised me, was the schoolchild, Chuck Carter.

RGG Question #17: At a reading, Nina tells an audience member that “with her first book she had seen the world as a narrative, seen human lives as narratives. Now, instead, she saw them as stories. She wasn’t sure what had happened [p. 205].” What does she mean by this statement?

This is Nina’s statement, not my own, but here’s how I believe she would explain herself: A narrative is like a ladder, a story like a blanket. A narrative is meant to engage the personality, a story to subsume it. A narrative is a way of complicating life, a story a way of simplifying it. A narrative is something that is told, a story something that merely exists. And the truth is that Nina knows exactly what has happened: she has been caught for so long in her awful mad tangle of pain and love and beauty and disease and light, and sees so little possibility of escaping it, that she longs only to see herself subsumed; to be blanketed in simplicity; to be, for a change, rather than to be told. The irony is that the story she herself composes, “A Fable for the Living,” is so intimate an expression of her character, an eldritch little fairy tale of escape hiding a powerful current of self-exploration—in other words, a narrative disguised as a story.

Kevin Brockmeier’s previous books include The Brief History of the Dead, The View From the Seventh Layer, Things That Fall From the Sky, and The Truth About Ceilia. Read an excerpt from The Illumination.