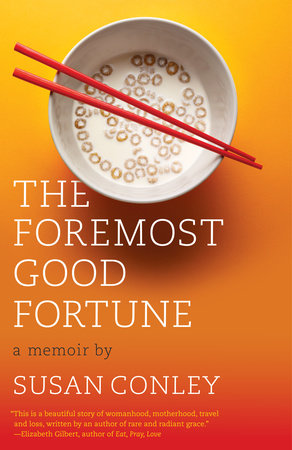 The Foremost Good Fortune is a poignant and insightful memoir that delves into the trickiest questions of motherhood, mortality, and belonging. When Susan Conley and her family leave their house in Maine for a two-year stint in Beijing, they are prepared to weather the inevitable onslaught of culture shock. But the challenges of living in a foreign country become even more complicated when Susan learns she has cancer. In this exclusive letter to her readers, Susan reflects on the reaction to the book and answers some oft-asked reader questions.

There’s a line in The Foremost Good Fortune about a small room that I built inside my head to get some distance on my boys when they began to make me crazy in China. This is the line that so many good people have repeated back to me at book readings around the country this year.

I’m talking about the amazing mothers and fathers and grandmothers and grandfathers and world travelers and old China hands and cancer patients who found their way to me at bookstores and libraries and living rooms and said I want a room in my mind like the one you built in the book.

Sometimes these kind people have gotten excited and taken me by the arm, or even hugged me and said, Where is that room? And how fast can I get there? Then they often thank me for not being a perfect mother and for being able to admit it.

The other great thing that happens at all my book readings is that some big-hearted person calls out to me up at the podium and says, “Are you cancer free now?” In fact, I got asked this question so many times that I now say something preemptive at the start of readings that goes like this: “My story is one with a happy ending. I’m now two years cancer free.” And when I say that sentence, I can actually feel the room let out a sigh of relief.

“Should we be afraid of China?” This is another big question. Or maybe it’s more of a group worry. And then lastly, “What about the air pollution? Can you tell us more about the pollution in China?”

I want to say for the record that the air pollution is often as bad as you may think. It’s pretty terrible, so I say imagine the worst and then you won’t be surprised if you go there. But you should still go there. Because the country is that wondrous and vexing and magnificent and since I’ve moved home from Beijing, I’ve become something of a proselytizer. Go. I say to anyone who asks. Go to China tomorrow if you can. There’s too much going on there to not see it up close.

My two boys are the other leading characters in this book, and I wrote the story for them and to them. In a way the book is about my fascination with how their minds work and about my fierce love for them. We’re two years out from China now and four years out from cancer. Time rushes by.

Tony and Aidan and Thorne and I were driving home to Portland from northern Maine a few months ago—a long enough drive for us all to sit quietly and stare out the windows. Then out of nowhere Thorne asked me one of his incisive, fifth grade questions. “Mom, he said. “What’s the moral of your story anyway? I mean really Mom, what’s the moral of your book?”

I laughed and then I froze. What WAS the moral? Or at the least the moral I could tell him at age ten? What I said was, “The moral of my story is that it’s a great thing to move to China with your family because you learn so much.”

“And about yourselves.” I added. He was quiet then. I’d momentarily satisfied his unending need for answers. I sat back in the passenger seat and realized we’d been to China and then to cancer and then back again, and that somewhere in that journey lies the real moral of the story.

Click to read an excerpt from The Foremost Good Fortune and to download the reading group guide.