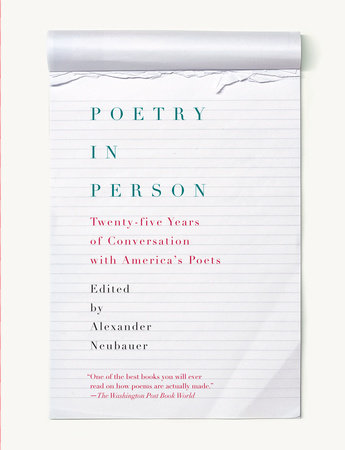 In Alexander Neubauer’s Poetry in Person, we are treated to a series of remarkable conversations that were recorded in the classroom of the legendary New School poetry teacher Pearl London, from the early 1970s through the mid-1990s – a time when a significant generation came of age in American poetry. Among the many visitors to her class (whom London asked to bring drafts of poems in progress, so that her students could learn about the nitty-gritty of creation and revision) were Lucille Clifton, Robert Pinsky, Paul Muldoon, Derek Walcott, Louise Glück, Charles Simic, and Galway Kinnell. In the chapter excerpted below, we hear London talking with Amy Clampitt, who came to the classroom in February of 1983, right at the time of her late-in-life début with The Kingfisher. She was sixty-three when it was published (and hailed by Helen Vendler in The New Yorker). The poem under discussion here is “Black Buttercups,” which would appear in Clampitt’s second book, What the Light Was Like. (The full text of the poem follows the conversation.)

PEARL LONDON: Let me say that, first, I’m so delighted, because we’ve all been wondering who Amy Clampitt is and what she looks like, and now we have you with us. Tell us about the metaphor of “Black Buttercups.” Are there really “black buttercups that never see daylight”?

AMY CLAMPITT: No. [Laughter] I’m very happy to talk about this poem because I think perhaps this poem has been longer in the making than almost anything I’ve ever finished. In various forms I was trying to write about what for strange reasons was for me a very traumatic experience— it sounds simple enough, moving from one house to another. But in the process of thinking about that experience, I suppose I began going back into something that went deeper. I’m not being psychoanalytical, but the metaphor of the black buttercups has to do with unfulfilled possibilities. I suppose we all know about such things in our own background and among our own families, among friends: about the experience of being moved from one place to another—”uprooted,” as it were— at the age of not quite ten.… One problem I ran into in writing this poem— I was going to describe an idyllic place I was forced to leave, but the fact is, although it was an idyllic place in my memory, there’s also a place where I discovered a lot of nonidyllic things. So have you got a poem there anymore? I don’t know. That’s one reason why it took me a long time to write this, because it turns out that when I started thinking about the years I spent in that house, which was the earliest house I remembered, I had to acknowledge that there were many things that were anything but idyllic. So I suppose that’s kind of the central core of the poem— there are these contradictions and there is this sense of things that went wrong that were never acknowledged. So that’s the black buttercups really.

LONDON: In “Black Buttercups” you ask, “When / . . . did the rumor / of unhappiness arrive?” And then we know that there’s that whole sense of menace and there is no safety— menace in the water, menace where the bull is in the pasture, and menace walking in that graveyard, I think it was. But that one understands in childhood. What was difficult to grasp for us were some of the particulars. Let me read you these lines and see if you can comment for us: “The look of exile / foreseen, however massive or inconsequential, / hurts the same; it’s the remembered / particulars that differ.”

How is one to measure
the loss of two blue spruces, a waterfall
of bridal wreath below the porch, the bluebells
and Dutchman’s-breeches my grandmother
had brought in from the timber
to bloom in the same plot with peonies
and lilies of the valley? Or out past
the pasture where the bull, perennially
resentful, stood for the menace of authority
(no leering, no snickering in class),
an orchard—or a grove of willows
at the far edge of the wet meadow
marking the verge, the western barrier
of everything experience had verified?

CLAMPITT: That whole catalog is really things that— I could go on forever. Part of the difficulty of writing that poem was to narrow down all of the things that I remembered, and they’re mostly growing things. My earliest memories were flowers, and it seems as though the pleasure I found in being a child had to do with spring arriving and finding things in bloom, and when you’re a child, of course, it seems like a thousand years since the last spring; you don’t believe it’ll ever arrive again. So they tended to gather around things that bloom; that’s what I meant.

In March, the farmer’s month
for packing up and moving on, the rutted
mud potholed with glare, the verb to move
connoted nothing natural, such as the shifting
of the course of streams or of the sun’s
position, sap moving up, or even
couples dancing. What the stripped root, exhumed
above the mudhole’s brittle skin, discerned
was exile.
Exile to raw clapboard,
a privy out in back, a smokehouse
built by the pioneers, no shade trees
but a huddle of red cedars, exposure
on the highest elevation in the township,
a gangling windmill harped on by each
indisposition of the weather,
the mildewed gurgle of a cistern
humped underneath it like a burial.
Menace
inhabited that water when the pioneers,
ending their trek from North Carolina, farther
than Ur of the Chaldees had been from Canaan,
settled here and tried to root themselves:
four of the family struck down on this farm
as its first growing season ended. Menace
still waited, literally around the corner,
in the graveyard of a country church,
its back against the timber
just where the terrain began to drop (the creek
down there had for a while powered a sawmill,
but now ran free, unencumbered, useless)—
that not-to-be-avoided plot whose honed stones’
fixed stare, fanned in the night
by passing headlights, struck back
the rueful semaphore:
There is no safety.
I was ten years old.
Not three miles by the road that ran
among the farms (still less if
you could have flown, or, just as unthinkable,
struck out across country, unimpeded
by barbed wire or the mire of feedlots)
the legendary habitat of safety
lay contained: the memory
of the seedleaf in the bean, the blind
hand along the bannister, the virgin sheath
of having lived nowhere but here. Back there
in the dining room, last summer’s
nine-year-old sat crying on the window seat
that looked into the garden, rain
coursing the pane in streams, the crying
on the other side and it one element—and sits
there still, still crying, knowing
for the first time forever what it was
to be heartbroken.
The look of exile
foreseen, however massive or inconsequential,
hurts the same; it’s the remembered
particulars that differ. How is one to measure
the loss of two blue spruces, a waterfall
of bridal wreath below the porch, the bluebells
and Dutchman’s-breeches my grandmother
had brought in from the timber
to bloom in the same plot with peonies
and lilies of the valley? Or, out past
the pasture where the bull, perennially
resentful, stood for the menace of authority
(no leering, no snickering in class),
an orchard—or a grove of willows
at the far edge of the wet meadow
marking the verge, the western barrier
of everything experience had verified? We never
thought of going there except in February,
when the sap first started working up
the pussywillow wands, the catkins
pink underneath a down of eldritch silver
like the new pigs whose birthing coincided,
shedding their crisp cupolas’ detritus
on the debris of foundering snowbanks
brittle as the skin of standing ponds
we trod on in the meadow, a gauche travesty
of calamity like so many entertainments—
the nuptial porcelain, the heirloom crystal
vandalized by wanton overshoes, bundled- up
boredom lolling, while the blue world reeled
up past the pussywillow undersides of clouds
latticed by swigging catkins soon to haze
with pollen-bloat, a glut
run riot while the broken pond
unsealed, turned to mud
and, pullulating, came up buttercups
lucent with a mindlessness as total
as the romp that ends up wet-mittened,
chap-cheeked, fretful beside the kitchen stove,
later to roughhouse or whine its way
upstairs to bed.
Night froze it up again
for the ten thousandth time, closing the seals
above the breeding ground of frogs, the Acheron
of dreadful disappointed Eros
stirring up hell—the tics,
the shame, the pathological ambition,
anxiety so thick sometimes that nothing
breeds there except more anxiety,
hampering yet another generation, all
the sodden anniversaries of dread:
black buttercups that never see daylight
or with lucent chalices drink of the sun.
Did we then hear them moving
wounded from room to room? Or in what shape
was it we first perceived it—the unstanched
hereditary thing, working its way
along the hollows of the marrow,
the worry taking root within like ragweed,
the noxious pollen flowering into
nothing but sick headaches
passed down like an heirloom? When,
under the same roof the memory of
a legendary comfort had endowed
with what in retrospect would seem
like safety, did the rumor
of unhappiness arrive? I remember waking,
a February morning leprous with frost
above the dregs of a halfhearted snowfall,
to find the gray world of adulthood
everywhere, as though there never
had been any other, in that same house
I could not bear to leave, where even now
the child who wept to leave still sits
weeping at the thought of exile.

Excerpt from POETRY IN PERSON © 2010 by Alexander Neubauer. Excerpted by permission of Alfred A. Knopf, a division of Random House, Inc. All rights reserved. No part of this excerpt may be reproduced or reprinted without permission in writing from the publisher.