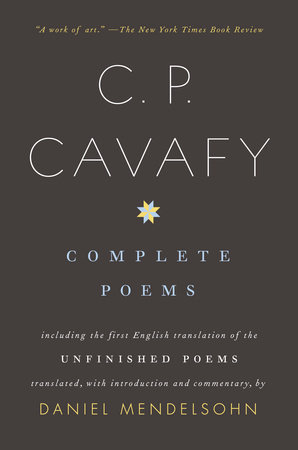 An extraordinary literary event: Daniel Mendelsohn’s acclaimed two-volume translation of the complete poems of C. P. Cavafy—including the first English translation of the poet’s final Unfinished Poems—now published in one handsome edition and featuring the fullest literary commentaries available in English, by the renowned critic, scholar, and international best-selling author of The Lost.

No modern poet so vividly brought to life the history and culture of Mediterranean antiquity; no writer dared break, with such taut energy, the early-twentieth-century taboos surrounding homoerotic desire; no poet before or since has so gracefully melded elegy and irony as the Alexandrian Greek poet Constantine Cavafy (1863–1933). Whether advising Odysseus on his return to Ithaca or confronting the poet with the ghosts of his youth, these verses brilliantly make the historical personal—and vice versa. To his profound exploration of longing and loneliness, fate and loss, memory and identity, Cavafy brings the historian’s assessing eye along with the poet’s compassionate heart.

After more than a decade of work and study, Mendelsohn—a classicist who alone among Cavafy’s translators shares the poet’s deep intimacy with the ancient world—gives readers full access to the genius of Cavafy’s verse: the sensuous rhymes, rich assonances, and strong rhythms of the original Greek that have eluded previous translators. Complete with the Unfinished Poems that Cavafy left in drafts when he died—a remarkable, hitherto unknown discovery that remained in the Cavafy Archive in Athens for decades—and with an in-depth introduction and a helpful commentary that situates each work in a rich historical, literary, and biographical context, this revelatory translation is a cause for celebration: the definitive presentation of Cavafy in English.

Constantine Petrou Cavafy, widely recognized as the greatest of modern Greek poets, was born in Alexandria in 1863 into a family originally from Constantinople. After some childhood years spent in England and a stay in Constantinople in the early 1880s, he lived his entire life in Alexandria. It was there that he would write and (for the most part) self-publish the poems for which he became known, working all the while as a clerk in the Irrigation Office of the Egyptian government. His poetry was first brought to the attention of the English-speaking public in 1919 by E. M. Forster, whom he had met during the First World War. Cavafy died in Alexandria on April 29, 1933, his seventieth birthday; the first commercially published collection of his work appeared posthumously, in Alexandria, in 1935.

Daniel Mendelsohn was born on Long Island and studied classics at the University of Virginia and at Princeton. His reviews and essays on literary and cultural subjects appear frequently in The New Yorker and The New York Review of Books. His books include a memoir, The Elusive Embrace, a New York Times Notable Book and a Los Angeles Times Best Book of the Year; the international best seller The Lost: A Search for Six of Six Million; and a collection of essays, How Beautiful It Is and How Easily It Can Be Broken. He teaches at Bard College.