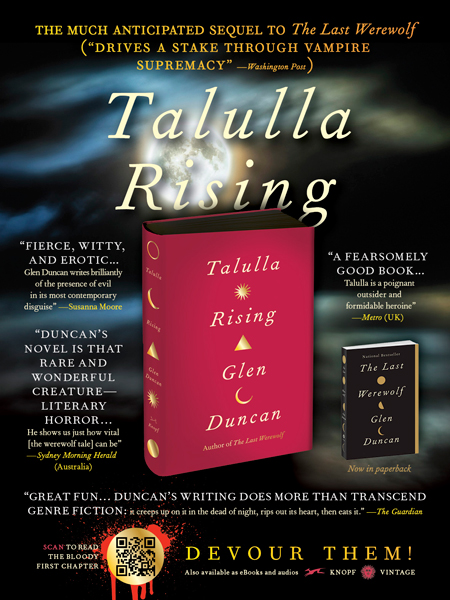 When I change I change fast. The moon drags the whatever-it-is up from the earth and it goes through me with crazy wriggling impatience . . . I’m twisted, torn, churned, throttled—then rushed through a blind chicane into ludicrous power . . . A heel settles. A last canine hurries through. A shoulder blade pops. The woman is a werewolf.

The woman is Talulla Demetriou.

She’s grieving for her werewolf lover, Jake, whose violent death has left her alone with her own sublime monstrousness. On the run, pursued by the hunters of WOCOP (World Organisation for the Control of Occult Phenomena), she must find a place to give birth to Jake’s child in secret.

The birth, under a full moon at a remote Alaska lodge, leaves Talulla ravaged, but with her infant son in her arms she believes the worst is over—until the windows crash in, and she discovers that the worst has only just begun . . .

What follows throws Talulla into a race against time to save both herself and her child as she faces down the new, psychotic leader of WOCOP, a cabal of blood-drinking religious fanatics, and (rumor has it) the oldest living vampire.

Harnessing the same audacious imagination and dark humor, the same depths of horror and sympathy, the same full-tilt narrative energy with which he crafted his acclaimed novel The Last Werewolf, Glen Duncan now gives us a heroine like no other, the definitive twenty-first-century female of the species.

Glen Duncan is the author of eight previous novels. He was chosen by both Arena and The Times Literary Supplement as one of Britain’s best young novelists. He lives in London.

From our Q&A with the author:

Q: You created such a memorable and beloved character in Jake Marlowe. Was it difficult to switch voices and start writing in Talulla’s voice?
A: It was, of course, difficult to say goodbye to Jake. I was very fond of him, not least for all the vicarious smoking, boozing, cynicism and STD-immune sex he afforded me. But the point of these novels is to keep refreshing the werewolf myth in ways that shed light on the human experience, and by the end of the first novel I felt his voice had done as much as it could; to continue in it would have been the equivalent of the band not knowing when to quit the encores. Talulla’s predicament—of someone new to the Curse and vulnerable—prised open the basic questions from a new angle, and helped keep the imaginative process vital.

Q: Have you ever written a novel primarily from a women’s perspective before? Does that change the writing process for you at all?
A: I’ve never written a novel exclusively in a woman’s voice, but an earlier novel, Love Remains (a rape story), was written partly in the voice of a female character, Chloe Palmer. The temptation is to say that it doesn’t change the writing process, since any novel worth its salt is an act of imaginative projection, but what I’ve found is that there’s something to be said for not being able to take anything for granted. I can write characters like Jake in my sleep; by and large their psychology is simply my psychology, projected into their unusual predicament. Talulla (and Chloe) on the other hand, require a process of constant imaginative self-scrutiny—is this really what a woman would do/think/say/feel?—in a way the male (Glen Duncanesque) characters don’t. If you’re lucky, the writing gets cleaner. If you’re not, the characters are simply unconvincing.