New In Paperback: Charles C. Mann's 1493 Explores the Birth of the Modern World 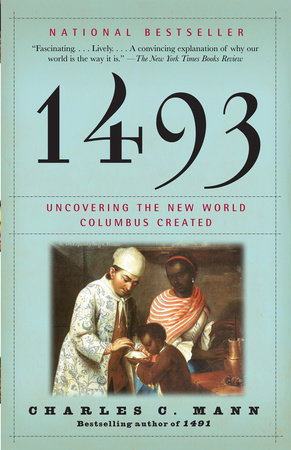 Read an Excerpt | Buy the Book

1493 by Charles C. Mann is an eye-opening and deeply engaging new history of how European settlements in the post-Colombian Americas shaped the modern world.

In this history, a follow-up to the bestselling 1491, Mann uncovers the germ of today’s fiercest political disputes, from immigration to trade policy to culture wars. He presents the latest research by biologists, anthropologists, archaeologists, and historians to demonstrate how the post-Columbian network of ecological and economic exchange fostered the rise of Europe, devastated imperial China, convulsed Africa, and for two centuries made Mexico City—where Asia, Europe, and the new frontier of the Americas dynamically interacted—the center of the world.

1493 has been roundly praised by critics; it was named a Notable Book of the Year by The New York Times and The Washington Post, and a Best Book of the Year by TIME Magazine. Said The Washington Post, “Exemplary in its union of meaningful fact with good storytelling, 1493 ranges across continents and centuries to explain how the world we inhabit came to be.” The San Francisco Chronicle agreed, adding, “Even the wisest readers will find many surprises here…. Like 1491, Mann’s sequel will change worldviews.”