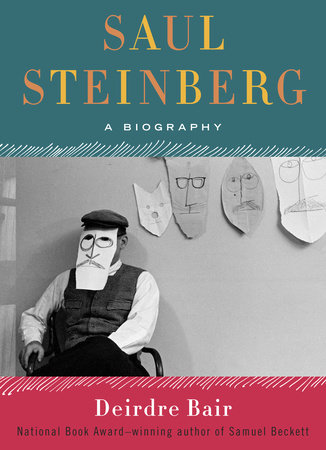 We’re thrilled to share the full text from the starred, boxed review that appeared in the August 27th edition of Publishers Weekly:

“The pre-eminent New Yorker cartoonist, creator of the famously self-obsessed Manhattan map that squeezes the unimportant remainder of the planet into the margins, leads a life worthy of his own ironic art in this scintillating biography. National Book Award winner Bair (Samuel Beckett: A Biography) chronicles Steinberg’s career as the ‘Picasso of the art form known as the doodle’ whose work made the adjective ‘Steinbergian’ a by-word for an off-kilter blend of visual satire and philosophical complexity. Steinberg emerges as a tangle of neurotic contradictions: a wildly successful commercial artist with insecure longings for high-brow cachet; a disaffected immigrant son who was also the financial mainstay of his grasping family; a European modernist with an abiding love for Americana; a callous philanderer who remained a stalwart provider to a string of melodramatic women. Bair’s long and amply researched biography unfolds in a graceful prose that’s stocked with absurdist scenes — hastily inducted into the Navy as a propaganda officer, Steinberg was baffled by the salutes he received — and colorful characters, led by Steinberg’s hilariously domineering mother, Rosa, the archetype of similar figures in his art and relationships. But much like one of her subject’s caricatures, Bair’s breezy writing works subtly and slyly to unearth psychological depths beneath that amusing surface of the Steinbergian picaresque.”