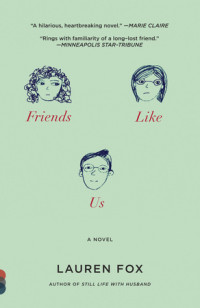 Friendship, in life and in literature, often takes a back seat to the more overt passions of romantic love. But in my own life, friendships, particularly with women, have been as important and as emotionally powerful as romantic relationships, and sometimes more fraught with drama and heartache. The deep bonds and painful ruptures of friendship, the mad love and the awful breaks, are our earliest templates for romance, and the friendships that endure are a map of our hearts. Some remarkable fiction recognizes this—that platonic friendships are dramatic and fraught and juicy and mixed up and passionate, rife with high stakes and betrayal: in short, perfect grist for the literary mill. Here are five of my favorite books about friendship in all its messy glory.

The Amazing Adventures of Kavalier and Clay, by Michael Chabon
Cousins and best friends in an artistic/professional alliance, with solid helpings of ambition, obligation, guilt, grief, sexual identity, myth, superheroes, and the obligatory love triangle, against a backdrop of European fascism. The friendship of Joe Kavalier and Sam Clay is complex and devastating, and it’s the beating heart of this big, remarkable novel.

The Harry Potter series, by J.K. Rowling
Sometimes, in a friendship, one person gets all of the glory, whether he wants it or not. The collateral emotional damage is inevitable. Harry, of course, is the chosen one, which leaves Ron and Hermione—especially Ron—either to contentedly bring up the rear or to stew quietly as their best friend reaps the mixed benefits of superstardom. It’s a lot like adolescence, albeit with the addition of magic and the constant threat of death. Harry Potter illuminates the ways in which betrayal among friends can be as unintentional as it is heartbreaking. As the series progresses, the books examine Ron’s resentment, Harry’s arrogance and confusion, and Hermione’s torn allegiances in a complex and sensitive way.

Cat’s Eye, by Margaret Atwood
And speaking of adolescence…Cat’s Eye is an examination of the almost surreal cruelty girls are capable of inflicting on each other, and the desperation on the other side of it. Cat’s Eye is the first book I read that uncovers the ugly underbelly of friendships among young girls. Twenty years ago, I think that was more or less a secret we kept from ourselves and from each other, and Cat’s Eye, although exaggerated and Gothic (to wit: attempted murder), exposes shattering psychological truths about female friendship.

The Group, by Mary McCarthy
For better or worse, friendships among women are often about men. The Group, proto–Sex and the City, is a brilliant and unapologetically juicy novel of the intertwined stories of the women of Vassar ’33, and the trials and tribulations of their lives post-college, including love, lust, infidelity, sexual identity, politics, money troubles, and involuntary psychiatric committal. You know, just the usual ups and downs. The Group was revelatory to me because it considers the lives and concerns of these women, the details of which are still often dismissed as trivial, with the utmost seriousness.

Waiting for Godot, by Samuel Beckett
Two bickering old geezers, co-dependent and devoted to each other, reliving former glories and loves and journeys: Waiting for Godot is a startlingly sweet story of friendship buried underneath a bucket of existential muck. Vladimir and Estragon play tricks on one another, mind games and word games, they threaten and cajole, they mock and bond over food and their painful feet. They’re so entwined with one another that they finish each other’s sentences. They take turns propping each other up as one or the other grows disillusioned. Most of all, they refuse to leave one another’s side, even in the face of a dying dream. (Beckett? Depressing? No way.)

Lauren Fox is the author of Friends Like Us and Still Life With Husband.