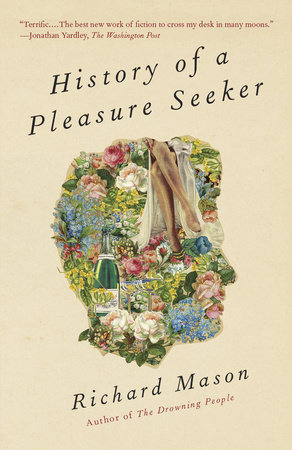 A brilliantly written portrait of the senses, History of a Pleasure Seeker by Richard Mason is an opulent, romantic coming-of-age drama set at the height of Europe’s Belle Époque, written with a lightness of touch that is wholly modern and original.

We recently had the chance to sit down and discuss the book with one of its fans—Dan Stevens, who plays Matthew Crawley on Downton Abbey.

Q: What interested you most about History of a Pleasure Seeker when you first read it?

A: It fits into a genre, a classic kind of theme, really, the middle-class outsider coming into a wealthy, aristocratic family, and particularly at that period, the sort of wealth that was flying around somewhere like Amsterdam, the sort of luxurious household that the Vermeulen-Sickerts live in, is very very attractive to somebody like Piet Barol who is a pleasure-seeker. He finds all sorts of pleasure within those walls. It’s not too dissimilar from another book I know very well called The Line of Beauty, an Alan Hollinghurst novel which deals with a similar kind of character, really, somebody who loves beauty in all its forms and seeks it wherever he can.

A: It’s interesting to explore that period of the early 20th century, be it in Downton Abbey, which is slightly later, 1912, or in History of a Pleasure Seeker, which is right at the turn of the century. It’s post-Industrial Revolution and there’s a huge amount of wealth spreading through Europe…. You have these aesthetes, like Piet Barol who want to, I guess quite literally, cash in on that, and enjoy this lifestyle that has emerged, this sort of upper-middle-class which burgeoned from the 1860s-onwards. Setting it in Amsterdam, the pleasure factor is slightly higher than it might be at Downton Abbey. The sexual and erotic pleasures available to Piet are more forthcoming than they might be for Matthew Crawley. But it’s definitely an interesting time, the emergence of the modern age coming out of the industrial period.