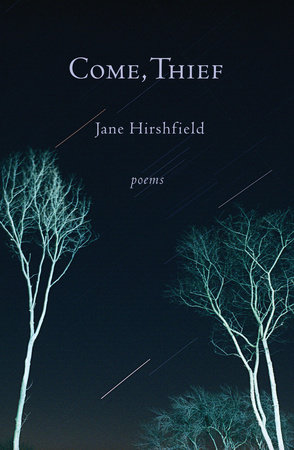 Jane Hirshfield is unsurpassed in her ability to sink into a moment’s essence and exchange something of herself with its finite music—and then, in seemingly simple, inevitable words, to deliver that exchange to us in poems that vibrate with form and expression perfectly united. Hirshfield’s poems of discovery, acknowledgment of the difficult, and praise turn always toward deepening comprehension. Here we encounter the stealth of feeling’s arrival (“as some strings, untouched, / sound when a near one is speaking. / So it was when love slipped inside us”), an anatomy of solitude (“wrong solitude vinegars the soul, / right solitude oils it”), a reflection on perishability and the sweetness its acceptance invites into our midst (“How suddenly then / the strange happiness took me, / like a man with strong hands and strong mouth”), and a muscular, unblindfolded awareness of our shared political and planetary fate.

To read these startlingly true poems is to find our own feelings eloquently ensnared. Whether delving into intimately familiar moments or bringing forward some experience until now outside words, Hirshfield finds for each face of our lives its metamorphosing portrait, its particular, memorable, singing and singular name.

White moths
against the screen
in August darkness.

Some clamor
in envy.

Some spread large
as two hands
of a thief

who wants to put
back in your cupboard
the long-taken silver.

Jane Hirshfield is the author of six previous collections of poetry, a now-classic book of essays, Nine Gates: Entering the Mind of Poetry, and three books collecting the work of women poets from the past. Her awards include fellowships from the Guggenheim and Rockefeller foundations, the Academy of American Poets, and the National Endowment for the Arts; three Pushcart Prizes; the California Book Award; The Poetry Center Book Award; and other honors. Her poems appear regularly in The New Yorker, The Atlantic, and Poetry and have been included in six editions of The Best American Poetry. Her collection Given Sugar, Given Salt was a finalist for the National Book Critics Circle Award, and After was named a “Best Book of 2006” by The Washington Post, the San Francisco Chronicle, and the United Kingdom’s Financial Times. She lives in the San Francisco Bay Area.