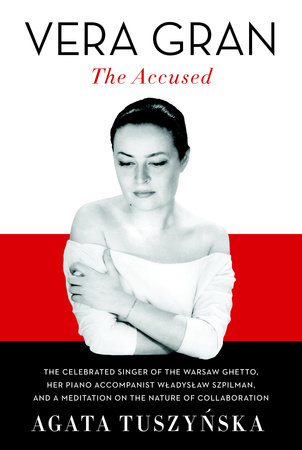 The extraordinary, controversial story of Vera Gran, beautiful, exotic prewar Polish singing star; legendary, sensual contralto, Dietrich-like in tone, favorite of the 1930s Warsaw nightclubs, celebrated before, and during, her year in the Warsaw Ghetto (spring 1941–summer 1942) . . . and her piano accompanist: Władysław Szpilman, made famous by Roman Polanski’s Oscar-winning film The Pianist, based on Szpilman’s memoir.

Following the war, singer and accompanist, each of whom had lived the same harrowing story, were met with opposing fates: Szpilman was celebrated for his uncanny ability to survive against impossible odds, escaping from a Nazi transport loading site, smuggling in weapons to the Warsaw Ghetto for the Jewish resistance.

Gran was accused of collaborating with the Nazis; denounced as a traitor, a “Gestapo whore,” reviled, imprisoned, ultimately exonerated yet afterward still shunned as a performer . . . in effect, sentenced to death without dying . . . until she was found by Agata Tuszyñska, acclaimed poet and biographer of, among others, Isaac Bashevis Singer, Nobel laureate (“Her book has few equals”—The Times Literary Supplement).

Tuszyñska, who won the trust of the once-glamorous former singer, then living in a basement in Paris—elderly, bitter, shut away from the world—encouraged Gran to tell her story, including her seemingly inexplicable decision to return to Warsaw to be reunited with her family after she had fled Hitler’s invading army, knowing she would have to live within the ghetto walls and, to survive, continue to perform at the popular Café Sztuka.

At the heart of the book, Gran’s complex, fraught relationship with her accompanist, performing together month after month, for the many who came from within the ghetto and outside its walls to hear her sing.

Using Vera Gran’s reflections and memories, as well as archives, letters, statements, and interviews with Warsaw Ghetto historians and survivors, Agata Tuszyñska has written an explosive, resonant portrait of lives lived inside a nightmare time, exploring the larger, more profound question of the nature of collaboration, of the price of survival, and of the long, treacherous shadow cast in its aftermath.

“Renders the World War II years in great detail, but the meat of the book lies in the accusation that Gran collaborated with the occupied forces in Warsaw and her vigorous, lifelong self-defense. . . . A great choice for Gran devotees or World War II enthusiasts.”—Kirkus

Agata Tuszyńska was born in Warsaw in 1957 and learned at the age of nineteen that she was Jewish, a secret kept by her mother, who survived the Nazi occupation of Poland. Tuszyńska graduated from the Academy of Drama and Theatrical Arts in Warsaw. She is the author of six collections of internationally translated poetry and a biography of Isaac Bashevis Singer. She is the recipient of the Polish PEN Club Ksawery Pruszyński Prize and a grant from the Fulbright Foundation. She lives in Toronto, Warsaw, and Paris.

Visit Agata’s website for updates about her events and books!