A Conversation With Joshua Henkin About The World Without You 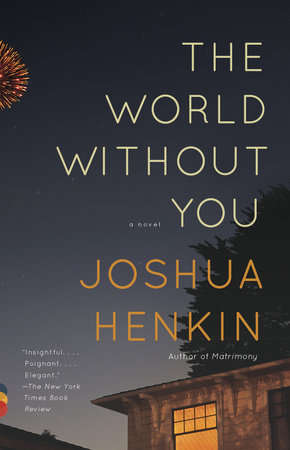 Set against the backdrop of Independence Day and the Iraq War, The World Without You by Joshua Henkin is a novel about sibling rivalries and marital feuds, about volatile women and silent men, and, ultimately, about the true meaning of family. In our author Q&A, Henkin talks about his characters, his inspiration for the book, and much more.

Q: Was there a particular event or idea that inspired The World Without You?
A: I had a first cousin who died of Hodgkin’s disease when he was in his late twenties. I was only a toddler at the time, but his death hung over my extended family for years. At a family reunion nearly thirty years later, my aunt, updating everyone on what was happening in her life, began by saying, “I have two sons…” Well, she’d once had two sons, but her older son had been dead for thirty years at that point. It was clear to everyone in that room that the pain was still raw for her and that it would continue to be raw for her for the rest of her life. By contrast, my cousin’s widow eventually remarried and had a family. This got me thinking how when someone loses a spouse, as awful as that is, the surviving spouse eventually moves on; but when a parent loses a child they almost never move on. That idea was the seed from which The World Without You grew. Although there are many tensions in the novel (between siblings, between couples, between parents and children), the original tension was between mother-in-law and daughter-in law, caused by the gulf between their two losses, by the different ways they grieve.

Q: Despite the tension and disagreements, the Frankel family undoubtedly loves one another. How would you describe the Frankels?
A: The extended Frankel family is, in fact, a loving one, but it’s also a family that’s quite varied geographically (the members hail from Berkeley to Jerusalem and everywhere in-between), politically (there are a couple of Bush supporters, as well as two characters who went down to Florida to protest the Supreme Court’s decision in Bush v. Gore), religiously (from gentile to secular Jew to Orthodox Jew), and—perhaps most important—temperamentally. Add to that the fact that they have endured a terrible loss, and you have a very complicated picture.

Q: Like the Frankel children, you grew up in a Jewish family on the Upper West Side of Manhattan. How did your own experience inform your writing? Are there any characters whom you can particularly relate to?
A: I think a writer’s own experience always helps inform his writing, but the ways in which it does so are complicated and not always readily apparent, even to the writer himself. I did grow up on the Upper West Side, in the neighborhood where the Frankel siblings were raised, and though it’s true that my family is Jewish and shares certain traits with the Frankels, in most ways the home I grew up in was quite different from the Frankel home, starting with the fact that my family was religiously observant. My father was Orthodox, the son of a rabbi, and though my mother was raised secular and remained largely secular even after she married my father, she agreed to raise my brothers and me in a kosher, Sabbath-observing home. My brothers and I attended Jewish day school and went to Jewish summer camp.

A couple of years ago, I gave a reading from an early draft of The World Without You, and I was reading with a woman novelist who read a section of her novel told from the perspective of a man. When the reading was over, she, too, was asked the gender question, and she said, “Are you kidding me? I spent half my life flirting with boys. I know them far better than I know girls.” She was kidding, sort of, but I think there’s a real truth there. In a lot of ways it’s easier to write from the perspective of someone different from you. We’re so close to our own experiences that we don’t see ourselves as clearly as we see others.

Q: There are so many strong personalities in this book ranging from Noelle, a born-again Orthodox Jew who arrives from Israel with her husband and four children, to Lily, a lawyer who goes to Leo’s memorial alone, insisting that her boyfriend of 10 years stay in DC. Are there any characters you are particularly fond of or had an especially good (or difficult) time writing about?
A: You have to love all your characters—not love them as human beings, certainly, but love them as characters, which means you have to take them seriously and respect their humanity and complexity. If you don’t, they won’t be real and you won’t be speaking the emotional truth. So while I could tell you that I’d rather go out to dinner with one than another, rather be stranded on a desert island with one than another, as characters, as my creations, they’re all equal; I play no favorites. The only thing I’d say is that I think a writer has to be careful with the characters who are more difficult human beings not to turn them into easy objects of derision—to complicate them, that is, as they deserve to be complicated.

Q: Noelle thanks her father, David, for being “the voice that understands there are things you can’t know.” What does she mean by that? What makes David such a likable character?
A: What Noelle means is that Amram has run off and her father, unlike her mother, isn’t going to reassure her that Amram’s coming back when he has no way of knowing that he will. And Noelle is grateful to him for that. But I think, consciously or not, Noelle may be referring to a broader trait of David’s—a kind of quiet self-containment that permeates his very being. Perhaps that’s part of what makes David likable. He has, after all, endured the loss of his son, and now his wife is leaving him, and he bears it all with grace and equanimity, even as he’s devastated.

I should add, though, that it’s not necessary for a novel to have likable characters. This is one of the great myths of fiction writing—that characters have to be likable in order for the book to be good. Think of Flannery O’Connor’s short stories. There’s not a likable character in the bunch. But those are some of the most brilliant, most affecting stories around. In fact, it seems to me that one of the pleasures of good fiction is that it allows us to enjoy the company of people on the page whose company we wouldn’t enjoy in real life. The writer’s obligation is to make his characters interesting, complicated, fully human, not to make them likable. A complicated, fully human, flesh-and-blood jerk is far preferable to a dull nice guy. What I want my readers to feel at the end of The World Without You is that they know my characters as well as or better than they know the people in their own lives. If they feel that, then I’ve done my job.

Q: Leo, the youngest of the Frankel siblings, was killed while on assignment in Iraq. Is there a political message in The World Without You?
A: I think I chose to have Leo killed in Iraq as a way of illustrating how far-away conflicts have an impact on even the most privileged of people. I come from the same socioeconomic background, roughly speaking, as the Frankels, and while I know a lot of people who have very strong feelings about the war, it often feels at one remove. I don’t know any soldiers who were killed. I suspect the Frankels didn’t, either. But then the war came and touched them in the most personal, horrific way. However, there is absolutely no message, political or otherwise, in The World Without You. Fiction that has messages is bad fiction. Which is not to say that I don’t have strong political opinions. My father was a professor of constitutional and international law at Columbia for fifty years. My mother is a human rights lawyer. You didn’t survive my family’s dinner table without having strong political opinions. But as a novelist, I check those opinions at the door. You should be able to finish The World Without You and not have any idea how I feel about the Iraq War or any other matter of electoral politics.

Q: What kind of research went into writing about the war, and particularly about Marilyn’s activism as a response to her son’s death?
A: Not much, in the end. I had a clear sense of what Marilyn was like, what her political opinions would be in general and especially now that her son has been killed. And she’s certainly not someone who would allow herself to be used on behalf of a cause she doesn’t believe in. She’s exactly the sort of character who would publicly refuse to talk to President Bush. I see her as someone who all her life has written letters to the editor, and now that her son has died she has graduated to writing op-eds. I read the newspaper, I keep up with a number of political blogs, so I didn’t need to do any additional research to have a sense of what kind of political activity Marilyn would be up to.

Q: The book’s epigraph, “Things seldom end in one event,” comes from a short story by Richard Ford. How does that observation relate to your novel?
A: That quote is from Ford’s collection Rock Springs, which was very influential for me when I was first becoming a writer. And Ford is the author of Independence Day, which, like The World Without You, takes place over a single July Fourth holiday. I think a good epigraph captures something about a book, and in this case what it captures is that what happened a year ago—Leo’s death, that huge, singular event for the Frankels—turns out to be only the beginning. Because now, in the aftermath of Leo’s death, Marilyn and David are splitting up, everyone else in the family is reeling, and there’s still more to come.

Q: What’s next for you?
A: A trip to Hawaii, I’m hoping! Writing a novel takes a lot out of you. Right now, I’m trying to figure out what comes next. I promised myself I would go back to writing short stories. It’s weird, I’ve spent the last nearly twenty years writing novels, when in so many ways I think of myself as a short-story writer. It was certainly my first love, and because I teach MFA students, I spend a lot of time reading and thinking about short stories. So last fall, when I finished the final draft of The World Without You, I immediately sat down to write a short story, and what happened? The draft I wrote was 113 pages along! And then the second short story I wrote was over 200 pages long! I still think I’m capable of writing a regular old twenty-to-thirty-page short story, but we’ll have to see. In the meantime, I’m tossing around some ideas for a new novel, but it’s still in the very early, incubating stages, so I’m not saying anything more than that.