An Alternate History and a Stunning Conspiracy 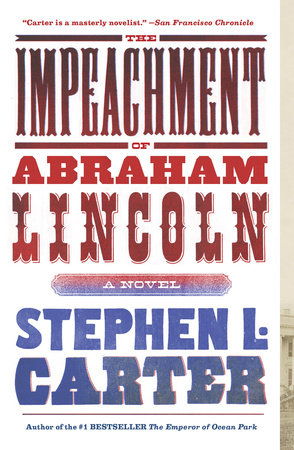 The Impeachment of Abraham Lincoln by Stephen L. Carter is set in an alternate history in which Lincoln survives the assassination attempt at Ford’s Theater, only to face an impeachment trial.

One month before the trial is scheduled to begin, a young black woman named Abigail Canner begins working for Lincoln’s defense lawyers. Her contributions are hardly noticed—until she uncovers a conspiracy that could undermine the congressional case and destroy the reputations of prominent politicians and some of America’s wealthiest families.

Using the conventions of a political thriller as well as those of a traditional historical novel, Carter brings to life a postwar Washington full of intrigue. And there’s plenty for your book club to discuss—power, race, and a ripping mystery.

Plus, if The Impeachment of Abraham Lincoln gets your group excited about reading historical mysteries, head on over to The Weekly Lizard—they’ve rounded up a whole bunch of favorites (including some classic book club picks!).