More than a Story: Author Chris Bohjalian on The Sandcastle Girls 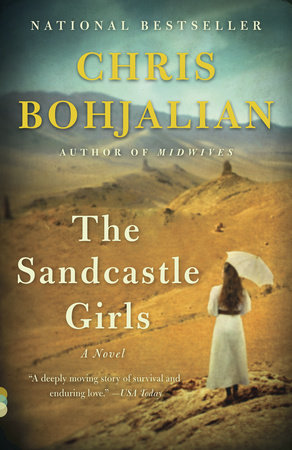 In this Reading Group Center exclusive, Chris Bohjalian talks about the incredible reader reaction to The Sandcastle Girls.

When I was writing The Sandcastle Girls and would tell people what it was about, often they would shake their heads and warn me, “You realize, don’t you, that no one is going to buy that book. No one has heard of the Armenian Genocide. No one can find Aleppo on a map.” There were also, of course, people who were enthusiastic and supportive, including Jenny Jackson, my editor at Doubleday. But there were times while I was immersed in what I hoped was a remarkable love story—albeit one set amidst the reality that 1.5 million of my ancestors were systematically slaughtered by their own government in the First World War—that I kept the premise of my book to myself. I didn’t want to hear that no was interested in a subject so profoundly important to me.

Now, as the Vintage paperback edition is being published, I look back on those exchanges and realize that:

1. The naysayers were right: A lot of North America indeed knew little of the Armenian Genocide and can only find Aleppo on a map today because of the cataclysmic civil war in Syria; and

2. The naysayers were wrong: They dramatically underestimated the curiosity and desire to learn of a lot of North American readers. The novel spent two months on the New York Times bestseller list.

Reading groups especially embraced the book and I think a reason is precisely that part of the subject matter was so foreign.

I say “part,” because some elements of the novel are familiar: It’s a love story between a rather feisty Mount Holyoke graduate from the class of 1915 named Elizabeth Endicott and Armen Petrosian, a young Armenian engineer and widower. Armen, by the standards of a Boston Brahmin such as Elizabeth, can only be considered exotic. We have all read and savored precisely this sort of love story: The well-bred girl and the “inappropriate” suitor.

But then there is the Genocide—what my narrator, Laura Petrosian calls “the Slaughter You Know Next to Nothing About.” In the waning days of the Ottoman Empire, the Turkish Government used the cover of the First World War to try and annihilate its Armenian minority and almost succeeded: It executed three out of every four Armenians living within its borders when the war began. Why, today, do so few North Americans know the story? Because Turkey denied the incontrovertible historical evidence and even now, 98 years later, the current Turkish government and many of its allies play realpolitik with the bones of the victims: They pretend it never happened, find euphemisms for what happened, or with Stalinesque creativity rewrite what happened.

The result is that from the very first days after The Sandcastle Girls was published, readers—many on social networks and many in book groups with whom I have Skyped—have asked me, “How did I not know this story? Why does no one teach it in school?” My Facebook feed was filled with comments such as these.

And I, in turn, was passionate to share with them all that I could. I am today and I will be tomorrow. Sometimes a novel is just a story. And sometimes it’s a little more than that: It’s your story. And suddenly you realize as you’re discussing it that it just might be the most important story you ever share.

Chris Bohjalian’s novel, The Sandcastle Girls, has just been published by Vintage Books. His new novel, The Light in the Ruins, will be published by Doubleday Books in July.