Joan Wickersham on Sleepwalking and The News From Spain 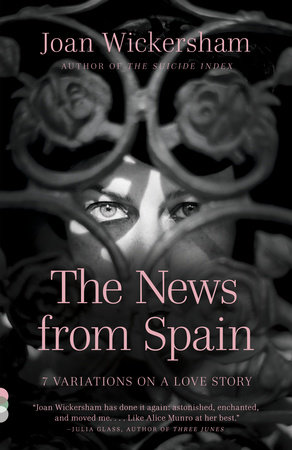 In 2008, Joan Wickersham’s memoir The Suicide Index was named a finalist for the National Book Award. So it’s no surprise, then, that her mesmerizing followup, The News from Spain, has received widespread acclaim from critics and readers alike. The book is both an NPR and San Francisco Chronicle Best Book of the Year and has earned Wickersham comparisons to Alice Munro.

Comprised of seven short stories—all titled “The News From Spain”—the book’s narratives span centuries and invent a cast of indelible characters, each struggling to understand the ineffable power of love. In one story, a doctor, a journalist, and the president’s wife find themselves entangled in a love triangle; in another, a girl confronts the unexpected consequences stemming from her own headlong quest for affection.

In an interview with The Boston Globe, Wickersham elaborates on how she composed the The News From Spain, which emerged from a dreamlike state. She explains:

If I’m in one of those trances, I can even go to the grocery store and do what I need to do but still be in the world of the writing. That’s really the best thing: When you feel like it’s talking to you, and you’re not trying to boss it around. It feels like sleepwalking in this lovely way, and I don’t want to be woken up.

The interview touches on origami, writers colonies, and the best position for writing. Don’t miss it, and don’t miss out on The News from Spain!