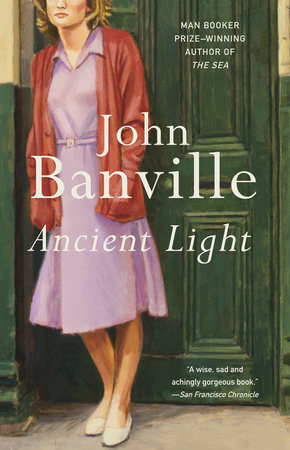 “When I look back all is flux, without beginning and flowing towards no end, or none that I shall experience, except as a final full stop.” So says Alexander Cleave, the protagonist of Man Booker Prize-winning author John Banville’s latest opus, and it’s a fitting introduction to the ever-changing past he explores in Ancient Light.

The novel, now available in trade paperback from Vintage, unfolds as a beautiful, haunting meditation on love, identity, and how the lives we remember living can differ so dramatically from the lives we’ve actually lived. Ancient Light concludes a trilogy that began with Eclipse and continued with Shroud, and properly understanding Banville’s newest novel requires at least a passing familiarity with its predecessors.

In Eclipse, Cleave—a successful actor—suffers an onstage nervous breakdown and retreats to his boyhood home to recuperate. As he becomes reacquainted with his true self, which has been buried underneath the accretion of a career’s worth of theatrical roles, he also has disturbing premonitions of the fate about to befall his estranged daughter. This daughter, Cass, plays an important role in Shroud, in which she unmasks a literary imposter known as Axel Vander shortly before vanishing for good.

Ten years later, in Ancient Light, Cleave finds himself cast as Axel Vander in a film adaptation of the writer’s life, unaware of the latter’s role in his daughter’s death. But Cleave finds it difficult to focus on the present or even the last decade, as he’s increasingly immersed in tender recollections of a teenage affair he conducted with his best friend’s mother. As their relationship unfolds, it becomes unclear how much of Cleave’s memory is fact and how much has been altered by nostalgia, creating fascinating connections between his past and his present.

If the novel’s plot is fairly straightforward, the connections between characters are anything but, and Banville takes a winking approach to the ways his creations’ lives parallel one another’s. For example, the spelling of “Axel Vander” bears more than just a striking resemblance to Cleave’s own first name. The film Cleave stars in is called The Invention of the Past, an apt description of his own reveries; and the film’s script was written by a character known simply as “JB,” who may or may not stand in for the author himself. But these jokes can’t hide the fact that Banville cares deeply about creating engaging, empathetic characters whose humanity holds up a mirror to our own.

Ancient Light is Banville’s 15th literary novel, but he has long been acknowledged as one of the English language’s finest writers. Even his early work reveals Banville, winner of the Franz Kafka prize, to be a master of his craft: consider picking up Long Lankin, a newly published collection of his poignant, beautifully composed stories.