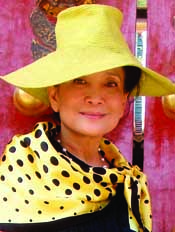 WHAT: EMPRESS DOWAGER CIXI:
The Concubine Who Launched Modern China

WHY: “A fascinating and instructive biography for anyone interested in how today’s China began.” —Charles Hayford, in a starred review
for LIBRARY JOURNAL

“The empress finally has her day.
“An impassioned defense of the daughter of a government employee who finagled her way to becoming the long-reigning empress dowager, feminist and reformer.
“Chang strongly argues for a fresh look at this much-maligned monarch, who presided over China at a challenging period, when it was on the cusp of modernization and foreign invasion. Chosen as one of several concubines for the teenage Emperor Xianfeng in 1852, 16-year-old Cixi possessed more poise than beauty and was used to asserting her will in her own family; her star rose when she gave birth to the emperor’s first son.
“A shrewd observer of the failed policy of trying to block Western influence in China, Cixi believed shutting out the enemy only brought catastrophe for the empire. After engineering the coup in 1861 that defeated the regents, effectively installing the two dowager empresses to power, Cixi ushered in a new era in the expansion of foreign trade centered in Shanghai and the buildup of a modern navy and arms industry. She welcomed foreigners and sent emissaries to tour Europe to report back on the outside world for the first time. The short-lived reign of her son Tongzhi, who died in 1875, meant that she continued on the throne, installing her sister’s son, Guangxu, as her adopted son, so that her popular modernization policy continued—e.g., the beginning of coal mining and the installation of electricity. The coming-of-age of Emperor Guangxu meant the retirement of Cixi and a heap of foreign humiliation on the country, starting with the war with Japan.
“Yet this tenacious empress rebounded from an assassination plot and exile to implement a series of remarkable reforms in the six years before her death in 1908.” —KIRKUS REVIEWS 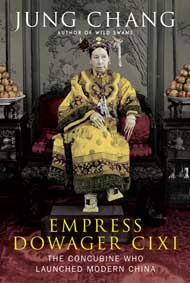 “When an author as thorough, gifted, and immersed in Chinese culture as Chang writes, both scholars and general readers take notice.”
—Margaret Flanagan, BOOKLIST