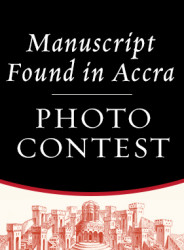 “Beauty exists not in sameness but in difference.” — Paulo Coelho

What inspires you? Share a photo you have taken of something you find beautiful or inspiring–from the ordinary to the extraordinary. Visit the Vintage Books & Anchor Books Facebook page or enter below, and submit your photo between now and February 17, 2014. While you’re there, you can vote on your favorite photos too! The winning photographer will receive a limited edition hardcover of Manuscript Found in Accra signed by the author.

1. NO PURCHASE NECESSARY TO ENTER OR WIN. A PURCHASE WILL NOT INCREASE YOUR CHANCE OF WINNING. Void where prohibited or restricted by law. The MANUSCRIPT FOUND IN ACCRA Photo Contest (the “Contest”) is open to legal residents of the fifty (50) United States. Entrants must be at least eighteen (18) years of age at the time of entry. The Contest is not open to officers, directors, employees or agents of Penguin Random House, LLC (the “Sponsor”), or Sponsor’s parent(s), divisions, subsidiaries, affiliates, licensees, advertising and promotional agencies (collectively, the “Excluded Parties”). Immediate family members, their children and spouses, and persons living in the household of Excluded Parties are not eligible to enter or win. The Contest is subject to all applicable federal, state, and local laws. Void where prohibited.

2. HOW TO ENTER: To be eligible to win, you must enter the Contest by opening the “MANUSCRIPT FOUND IN ACCRA Photo Contest” app on the Vintage Books & Anchor Books Facebook page and uploading a photo that you have taken. Limit one entry per person.

Only entries submitted in accordance with these rules will be eligible for consideration, and all entries must be received by Sponsor during the Entry Period as defined below. Incomplete or inaccurate entries will be deemed void. Sponsor is not responsible for computer, telephone or other malfunction resulting in late, lost or misdirected entries.

All entries will be moderated by the Sponsor before posting in the app. The Sponsor reserves the right to reject photo submissions deemed inappropriate solely at their discretion.

3. ENTRY PERIOD: Entry period commences at 12:01 a.m. (EST) on January 28, 2014 and expires at 11:59 PM (EST) on February 17, 2014 (the “Entry Period”). On or about February 18, 2014, the winner (the “Winner”) will be announced by Sponsor’s Marketing Department from among all eligible entries. Odds of winning will depend on the total number of eligible entries and votes received by Sponsor during the Entry Period.

4. HOW TO VOTE: Voting period commences at 12:01 a.m. on January 31, 2014. To vote, you must visit the “MANUSCRIPT FOUND IN ACCRA Photo Contest” app on the Vintage Books & Anchor Books Facebook page. Entrants and voters may vote once per day for the duration of the contest.

“LIKES” on photos within the Photo Contest album on the Vintage Books & Anchor Books Facebook page do not count as votes. All voting takes place within the app, beginning January 31.

5. WARRANTIES: Entrants represent, warrant, covenant and agree that: (i) they have full right and authority to enter this Contest; (ii) no rights of any kind or nature are being retained or reserved by you or any third party in connection with your Entry; and (iii) your photograph, in whole or in part, is original and shall not interfere with or infringe, under common or statutory law, the rights of any third party, including, without limitation contract rights, copyrights, trademarks, service marks, trade names, logos, rights of publicity and privacy, or otherwise violate the rights of any third party.

6. SELECTION OF WINNER: On or about February 18, 2014, one (1) Grand-Prize Winner will be announced in the app from among all eligible entries. The winner will be determined by the votes of participants and will be based on their determination as to which photos are the most beautiful and inspiring. Odds of winning will depend on the total number of eligible entries and votes received by Sponsor during the Entry Period. Notification of Winner will occur on or after February 18, via the contact information provided on their Facebook page or by Facebook message. Any Winner’s failure to acknowledge receipt/acceptance of Prize within five (5) days after notification is sent by Sponsor, or the return of any Prize notification as undeliverable will result in disqualification of the Winner without further notice and an alternate Winner will be selected from among the remaining eligible Entrants. All taxes on a prize are solely the responsibility of the Winners. If a Winner cannot accept a prize as stated, the prize will be forfeited in its entirety and awarded to an alternate winner. Any difference between the stated and actual value of a prize will not be awarded. No substitution, cash redemption or transfer of a prize shall be permitted but Sponsor reserves the right to substitute a prize of equal or greater value if the advertised prize is unavailable. Winners may be required, within ten (10) days following notification by Sponsor, to prove eligibility to the satisfaction of the Sponsor, including verification of age and residence. At the discretion of Sponsor, Winners may also be required to sign an affidavit of eligibility release. Noncompliance with any of these conditions will result in disqualification and selection of an alternate Winner.

7. GENERAL CONDITIONS: By participating in this Contest, Entrants agree to be bound by these Official Rules and the decisions of Author and Sponsor, which are final in all matters relating to this Contest. Sponsor is not responsible for typographical errors in the rules or any nature of technical malfunction, human error, lost/delayed data transmission, omission, interruption, deletion, defect, line failure of any computer on-line systems, servers or providers, computer equipment, software, failure on account of technical problems or traffic congestion on the internet or at any website or any combination thereof related to or resulting from participating in this Contest. If the Contest is not capable of running as planned for any reason, including, without limitation, infection by computer virus, bugs, tampering, unauthorized intervention, fraud, technical failures, or any other cause beyond the control of the Sponsor that corrupts or affects the administration, security, fairness, integrity or proper conduct of this Contest, Sponsor reserves the right, in Sponsor’s sole discretion, to cancel, terminate, modify or suspend the Contest. Should the Contest be terminated or cancelled prior to the stated expiration date, notice will be made on Sponsor’s website and/or Facebook page. Entries that have been tampered with or altered will be deemed void. The use of any system or agent to submit entries in connection with this Contest is prohibited and will result in disqualification. Sponsor reserves the right, in Sponsor’s sole discretion, to disqualify any individual deemed to be tampering with the entry process or the operation of the Contest.

8. NO REPRESENTATION OR WARRANTY BY SPONSOR: Sponsor makes no warranties, representations or guarantees with respect to the value of the Prize or any component of the Prize. By accepting the Prize, Entrants release and discharge Sponsor and Excluded Parties from any and all liability whatsoever in connection with the Prize, including without limitation legal claims, costs, injuries, losses or damages, demands or actions of any kind.

9. OWNERSHIP OF ENTRIES: Immediately upon entry, all entries become the property of Sponsor and will not be acknowledged or returned except as herein described. You hereby grant Sponsor, its parents, licensees, successors, assigns, agents and affiliates a perpetual and irrevocable, exclusive, royalty free, worldwide right, title and interest of every kind and nature now or hereafter known in the entry photograph, including but not limited to a) all copyrights therein, b) the right of reproduction of the photograph in any and all media whether now known and/or hereafter devised, in whole or in part, c) the moral rights of authors in the photograph in whole or in part and d) all rights of manufacture, merchandising, reproduction, adaptation, display and exhibition of the photograph in whole or in part and the right to make modifications thereto and derivatives thereof, in any and all venues or media whether now known and/or hereafter devised and by any and all means or methods.

10. NAME OF WINNER: For the name of the Winner, available after February 18, 2014, send a stamped, self-addressed envelope to: