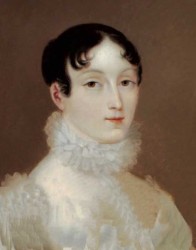 WHAT: WONDROUS BEAUTY,
a new biography by Carol Berkin

WHERE: Set in Baltimore and Europe.

WHY: “A wonderful story of a woman who managed to achieve independence and leave her mark in a world not quite ready for her.
“Berkin tells the story of Elizabeth Patterson Bonaparte (1875–1879), a strong woman who succeeded in spite of herself. The young Baltimore beauty was not only intelligent, but also blessed with a quick wit. She was a good friend of Dolley Madison, who introduced her to the best of Washington society.
“Brash and dressed in the newest shockingly bare styles out of France without a thought to opinion, she found that Jérome Bonaparte was just what she was looking for. The youngest brother of Napoleon, he did not enjoy the navy and left his post in the Caribbean to see America. Jérome and Elizabeth fell madly in love; after a lengthy fight with her father, the couple married in late 1803.
“Napoleon was livid and ordered his brother home to France—without that American girl. Elizabeth was banned from entering any port in Europe. Jérome finally succumbed to his brother’s demand, and his return to France in 1805 was the end of the marriage. After Napoleon annulled the marriage, she strove for her son’s legitimacy, first with the emperor himself and eventually with Napoleon III and finally in the courts of France, all to no avail.
“This story would be that of just another headstrong girl who married badly if it weren’t for her fierce independence. She went to Europe seeking intellectual freedom and an identity, carefully budgeted her scant funds, invested wisely and became one of America’s first self-made women.” —KIRKUS REVIEWS

“A fascinating portrait of a determined woman who defied convention.”
—Vanessa Bush, BOOKLIST

“Engaging and quick-reading.
Betsy’s little-remembered story exposes tensions between the Bonapartes while also revealing the fragility of her native country as her predicament briefly threatened diplomatic incidents in three countries while upsetting moral and patriotic purists in the process.” —PUBLISHERS WEEKLY 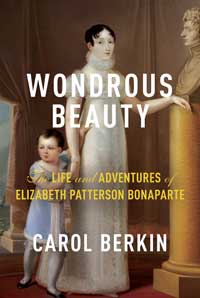 From the beginning of the book: She was a Baltimore legend, a curiosity, walking slowly down the streets of the city in the 1870s, her trademark red parasol high above her head to protect her from sun or rain or, in winter weather, draped carefully over her arm. On the other arm, she carried an ornate elaborately embellished bag that, it was rumored, held all her jewels. Her dress was no longer fashionable, perhaps made in that bygone era when Napoleon dominated Europe and America was little more than a fledgling nation. No matter; it was clear she had once been a great beauty, and even in her old age, she conveyed an elegance and a sense of superiority that captured admiration as well as curiosity. As she stopped at one building and then the next, rapping on doors and demanding the rent owed to her by tenants, passersby might have recognized her as their city’s first celebrity, Elizabeth Patterson Bonaparte.”