WHAT: CAMBRIDGE, a novel

WHERE: Set in Cambridge MA, London, Italy, and Greece.

WHY: “This raw, biting autobiographical novel frequently lights up to the point of incandescence with subtle descriptions and astute, witty anecdotes.
“Susanna, a ‘cranky and difficult’ young girl with complicated parental relations, recalls her formative years, traveling from English shores to Grecian temples, in this fictional memoir, which, as the title implies, focuses on the period she and her academic parents lived in Cambridge, Mass.
“The depiction of the courtship between Susanna’s piano teacher and her Swedish nanny, Frederika, in which the narrator’s mother and a few other key characters play strong supporting roles, is a literary tour-de-force, neatly displaying Kaysen’s unique talent for creating an engaging ensemble cast that comes uniquely alive under adolescent eyes.
“Susanna may not be the most likeable young girl, and she certainly spends a good deal of time wallowing in self-pity, but for Kaysen and her legion of fans, the focus on adolescence is a theme that works. And why not? Sometimes, parental neglect or some other sad reality is just a fact of life, and the effects are, unfortunately, affectingly real.” —PUBLISHERS WEEKLY

“A melancholic, poignant, and sharply observed account of a precocious child’s struggle to make sense of her place in the family and in the larger world.” —Ann Kelley, BOOKLIST 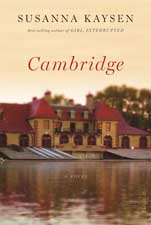 From the beginning of the book: It was probably because I was so often taken away from Cambridge when I was young that I loved it as much as I did. I fell in love with the city, the way you fall in love with a person, and suffered during the many separations I endured.