WHERE: Set in Dublin…on Chestnut Street!

WHY: “Binchy’s many fans are sure to line up the read this.
“Maeve Binchy was well-known for creating realistic characters who interact in ordinary ways, in ordinary places. Before her death, in 2012, she had been jotting down short stories here and there featuring a number of different characters who all lived on the same Dublin street, Chestnut Street.
“This collection was gathered by her editors and approved by her family for publication. Readers meet plain Dolly, who wants to be just like her glamorous mother; Joyce, a model who gets her comeuppance on a blind date with an obese man; and Kevin Walsh, the taxi driver who keeps strangers’ secrets. Many of the stories are quite brief… the collection works well, and her fans will be pleased.” —Rebecca Vnuk, BOOKLIST

“One finds here insightful observations about human nature—all with Binchy’s thoughtful and loving touch that will be sorely missed.” —PUBLISHERS WEEKLY 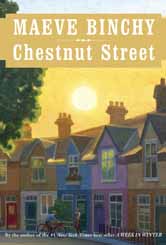 From the beginning of the book: It was all the harder because her mother had been so beautiful. If only Dolly’s mother had been a round, bunlike woman, or a small wrinkled person, it might have been easier for Dolly, this business of growing up. But no, there were no consolations on that score. Mother was tall and willowy and had a smile that made other people smile too and a laugh that caused strangers to look up with pleasure. Mother always knew what to say and said it; Mother wore long lilac silk scarves so elegantly they seemed to flow with her when she walked. If Dolly tried to wear a scarf, either it looked like a bandage or else she got mistaken for a football fan. If you were square and solid and without color or grace, it was sometimes easy to hate mother.