Armchair Adventurer: Visit the Tuscany of Chris Bohjalian’s The Light in the Ruins 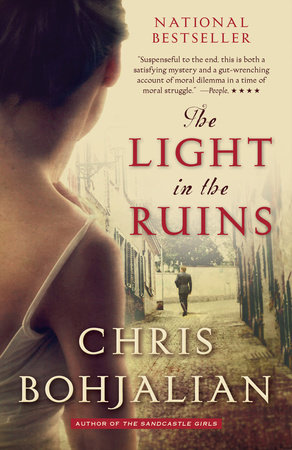 We are thrilled that Chris Bohjalian has shared a personal note about what inspired his spellbinding novel, The Light in the Ruins. Read on to delve into the historical background of the book and learn more about Tuscany during World War II.

Dear Reader,
The Light in the Ruins began as a re-imagining of Romeo and Juliet. I had just seen a Vermont production of West Side Story—my daughter was a Shark girlfriend—and I was interested in seeing what I might do with Shakespeare’s doomed lovers. I wasn’t sure, however, where I wanted to set my tale, so I set the idea aside and allowed it to gestate on its own.

A few years later, I was biking in southern Tuscany with a friend. We were approaching Montisi, which is a largely undiscovered little village near Pienza and Montepulciano. As we rested our bikes and looked across the narrow valley at the village, he pointed out to me the medieval granary tower at one edge.

I asked what happened.

“The Nazis tried to blow it up in 1944, when they were retreating,” he answered. “But they only managed to blow up the top.” Then he shrugged and added, “Man, we built things to last 700 years ago.”

Obviously I knew the Nazis had been in Tuscany in World War II. But when we think of Tuscany today, we think of Chianti and sunflowers and pecorino cheese. We think of rolling hills with flocks of sheep. We think of Under the Tuscan Sun.

But in the summer of 1944? It was an innermost ring of Dante’s Inferno.

And I knew instantly that here was where I would set my novel.

Tuscany is, of course, one of the most emblematic regions of Italy. For the traveler, it offers the joys of lush gardens, towering cypresses, and vintage wine. Beyond the fetching scenery and fine cuisine, its urban center, Florence, possesses a rich historical legacy. The Medici family reigned over the city from the fourteenth century on, and their wealth from textile trade brought about its prosperity—and a flourishing of the arts that gave birth to the Renaissance. Masters such as Donatello, Michelangelo, and Botticelli called Florence home. But Tuscany’s art history goes as far back as the Etruscans, the first major civilization in the region, whose art was characterized by figural sculptures as well as exquisite vase and wall painting—often connected to the Etruscans’ religious practices and beliefs about the afterlife.

In The Light in the Ruins, it is an Etruscan burial site near the noble Rosatis’ beautiful Tuscan villa that captures the attention of two soldiers—and triggers a chain of events that changes the lives of the family members forever. In late 1943 and 1944, when one of the two main storylines in the book takes place, Tuscany was in turmoil. After the Axis forces—Nazi Germany and Fascist Italy—lost ground in Tunisia and North Africa in early 1943, the Germans scrambled to retain control of Italy. The Allied troops’ invasion of Sicily in July 1943 set the stage for Benito Mussolini’s fall. Fearing retaliation from the Germans, the new Italian government worked in secret to negotiate an Armistice with the Allies. But the negotiation process dragged on, allowing the Germans time to reinforce their positions in Italy. As they tightened their grip, occupying Rome on September 10—just a week after the Armistice was signed, they clashed with the underground movement known as the Resistance. Between September 1943 and April 1945, the Nazis led a campaign of violence in Italy, often punishing innocent civilians for local partisans’ actions. According to historian Gianluca Fulvetti, Tuscany was one of Italy’s most afflicted regions, with more than 3,000 people losing their lives during the German troops’ retreat in June 1944.  Before the war was over, bloodshed and death had wreaked havoc on Tuscany and its beautiful hills, turning them into haunting memorials of war.

Chris Bohjalian uses this historical landscape as a backdrop to his story of a family—and a country—at a crossroads. Are the Rosatis Nazi sympathizers—as many of their neighbors believe? Or are they victims of the ravages of war, pulled into the vortex of violence against their will? More than a decade later, with a serial killer hunting down the  Rosatis one by one, the investigator on the case will have to put aside her long-buried secrets and piece together the puzzle—before the killer decimates the rest of the Rosatis clan.