Sarah Bird on Researching Above the East China Sea

In Above the East China Sea, Sarah Bird tells the entwined stories of two teenage girls whose lives are connected across seventy years by the shared experience of profound loss and redemption. Writing the book proved a rewarding but also challenging journey. Setting the novel on the island of Okinawa today and during World War II meant that Bird had to carry out a great deal of research to re-create the foreign locale in an authentic, distinctive way that transported the readers to the island’s shores. Some facts can be gleaned from books, but others need to be experienced first hand…. In this exclusive essay for the Reading Group Center, Sarah Bird recalls an entertaining story about one of the ways in which she familiarized herself with the local culture of the Ryūkyū Islands, of which Okinawa is the largest.

I have never researched any novel as thoroughly as I researched Above the East China Sea, or enjoyed the process more. Though I was stationed on Okinawa with my Air Force family when I was in my late teens, I was shockingly ignorant about the fascinating history and culture of the Ryūkyū Islands. So it wasn’t until I was in my sixties that I sampled such unique Okinawan foods as the bitter goya melon, which is like a warty cucumber; the islanders’ vivid violet super food, the purple sweet potato; ben imo cake made from those potatoes. And, although it’s Japanese, I had to search out a soft drink popular on the islands because who could resist a beverage called “Pocari Sweat” with a lemony Gatorade taste. 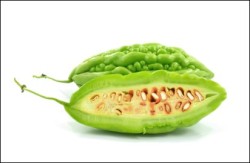 But what I really wanted to experience was a uniquely Okinawan drink I mention many times in the novel: awamori. This liquor distilled from Thai rice bears the same relationship to sake, a brewed beverage, as brandy does to wine. The finest, aged batches can compare to the best bourbons. Since it is my characters’ go-to celebration drink, I was determined to try it myself and test its legendary potency. After first calling several liquor stores and not finding anyone who’d ever even heard of the stuff, I went online. My hunt there always ended at pages marked “Under Construction.” 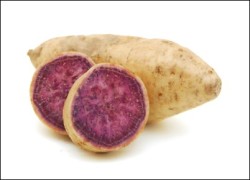 I’d pretty much given up when I attended a meeting of the Houston Okinawan association and asked one of the exceptionally warm and gregarious members if she knew where I might sample Okinawa’s national spirit. Indeed she did, she answered and, joined by several friends, issued this smiling invitation, “Follow us back to my house after the meeting.”

At her charming bungalow, glasses were produced and, at last, a bottle of awamori. The amber-colored liquor seemed to sparkle until the moment when my host placed it on the table in front of me, removed her hands and revealed a snake curled up on the bottom. 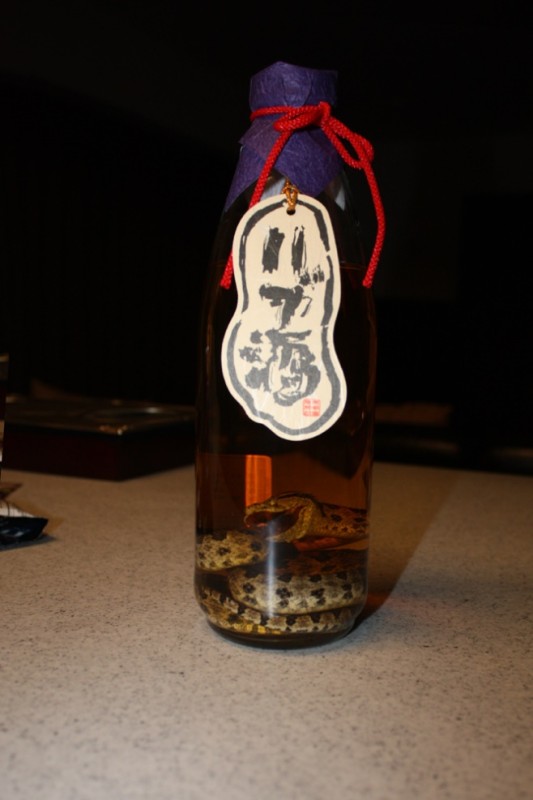 “Okinawan Viagra,” the host’s husband explained, grinning at my look of wide-eyed alarm. I’d read about the famous version of the liquor that came with its own deadly native habu viper, but had never imagined I’d see a bottle in this country.

The others drank theirs with ice and water, but insisting that my first taste must be undiluted, poured me a small glass straight. I had serious qualms about slugging back snake juice, but since they were all watching me, waiting, I lifted the glass to my lips. The smell was not promising, a sweetish-sour odor like fermenting fruit. The others raised their glasses, and with a round of hearty “Kampais!” all around, I took a sip. I’m probably not qualified to pass judgment on the spirit since my taste buds were momentarily overwhelmed by a searing heat and my mind clouded with visions of high school biology and our teacher plucking frogs from specimen jars.

Most likely the habu marinade didn’t taste like formaldehyde, but I wasn’t going to verify with a second sip. And, though I’d still like to try one of Okinawa’s justifiably famous, fine, reptile-free awamoris, my research was done for the day.