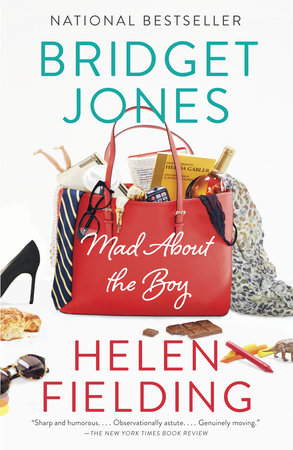 Fourteen years after landing Mark Darcy, Bridget Jones’s life has taken her places she never expected—yet she’s still the same irrepressible and endearing soul. In Helen Fielding’s Bridget Jones: Mad About the Boy, the third installment in the series, she’s a single mother, once again stumbling through the London dating scene.

Intent on a life makeover, she vows to “get on Twitter, Facebook, Instagram and WhatsApp instead of feeling old and out of it because everyone except self is on Twitter, Facebook, Instagram and WhatsApp.” Easier said than done—especially when weeks pass and Bridget’s Twitter following is still at zero. Her incredulity at how Twitter works is laugh-out-loud funny: “Have got onto Twitter site but do not understand. Is just incomprehensible streams of gibberish half-conversations with @this and @that. How is anybody supposed to know what is going on?” It gets worse when she asks random people, “Will you follow me on Twitter?”—and among her victims are her kids’ PE teacher and a staff member at the obesity clinic she frequents.

In this new stage of her “singleton” journey, Bridget, or @JoneseyBJ, is as hilariously blundering as ever, but the effect becomes dangerously amplified when she amasses 752 Twitter followers. There are Twitter fights, meltdowns, flirtations…. And yes, Bridget finds new dating prospects on social media! She’s officially a Twitter goddess.

Let’s take a look at one of Bridget’s momentous forays into Twitter, in which she learns to never drink while tweeting:

(If you have trouble viewing the excerpt below, please click here to view on Scribd.)

Use our reader’s guide to spark your discussion of Bridget Jones: Mad About the Boy.