Living with the Enemy: The Personal Story Behind Rhidian Brook’s The Aftermath 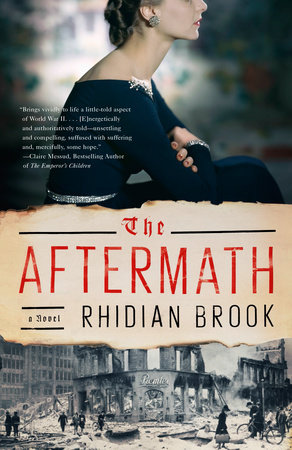 War and its aftermath have long been the subject of great literature, but the best examples are always the ones that personalize the history, allowing readers to experience it vicariously through the book’s characters. Rhidian Brook’s The Aftermath, about British and German families sharing a house in post-World War II Hamburg, achieves that, and more. Not only does the novel tell a harrowing and multi-layered story of loss and destruction, grace and hope, but it’s also based on a piece of family history that’s close to the author’s heart. In this essay for the Reading Group Center, Brook shares his inspiration for The Aftermath: his grandfather’s legacy of forgiveness. Don’t miss the supplementary image gallery, where you can browse the author’s family’s photographs.

The Aftermath is set in a relatively forgotten place and period: The British Zone, Germany one year after the Second World War. It’s central premise—an English family shares a house with a German family—is based on events involving my family’s time in post-war Hamburg and, in particular, a unique and radical decision taken by my grandfather.

From the In 1945, a defeated Germany was divided into four zones: British, American, French, and Russian. It’s said that the French got the wine, the Americans the view, and the British the ruins. For a time no one was sure what the future of Germany looked like. Some doubted it would ever be one country again. As many know, the British, French and American zones eventually joined to form West Germany in 1948; the Russian zone became East Germany. By then, the Cold War was well under way and the period was popularised by the film noir of Carol Reed and the ice-prose of le Carré. But just before things became espionage-obsessed, there was this extraordinary period during which the occupying forces wrestled with the massive task of rebuilding a smashed country and rehabilitating a damaged people, whilst at the same time trying to balance a need for forgiveness and justice against a desire for revenge and punishment.

The Aftermath takes its inspiration from something my grandfather did whilst serving as the British Governor of a district near Hamburg (a city that had more bombs dropped on it in one weekend than London received in the entire war). In August 1946 British families started arriving in Germany to be reunited with servicemen in the British Zone. There was such a shortage of housing that the British started requisitioning houses and putting their German owners in billets.  My grandfather went to view a house that had been requisitioned for him but, instead of asking the German family to leave, took the radical and (as far as my research showed) unique step of letting them stay. The two families ended up sharing the house for six years.

As a grandson, I’m proud of my grandfather’s humane action. As a writer, I’m grateful for the story it inspired.  The situation—so unusual in setting, so fraught with resentment and prejudice, so rich in thematic possibility—was a writer’s gift, full of potential drama on both a micro and macro scale: my grandmother’s reaction to being told she’d be sharing a house with Germans; the families trying to work out how to treat one another; the question of what happens when former enemies end up living together; and how you repair family life and a marriage—as well as a country. It was the richest material from which to build a story. But without my grandfather’s singular act of kindness, I’m sure there wouldn’t have been a story to tell.

Read an excerpt from The Aftermath and download our reading group guide to jumpstart your discussion.

Image Gallery
Click the thumbnails below to view an enlarged version: