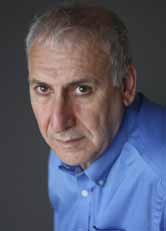 WHAT: GABRIEL: A Poem

WHY: “A near-unforgettable book-length verse memoir describing the life and death…of the poet’s only son.” —PUBLISHERS WEEKLY

“A landmark work…an elegy of such artistry and candor
that any reader, including those leery of poetry, will read it with rising awe.
“Hirsch masterfully tells the grueling, sometimes funny, and, finally, tragic story of the life and death of his son, Gabriel, in a commanding and propulsive book-length poem. Written in tercets (three-line stanzas) bereft of punctuation, Gabriel takes us through a childhood brutally hijacked by strangely tumultuous brain chemistry and the torments of cruelly tested parenthood. Hirsch recreates the hectic urgency of a boy in perpetual motion and ceaseless anxiety, describing Gabriel’s quicksilver moods, love of action and wheeling and dealing, wildly inventive humor, and insistence on being his impossibly unconventional and inconvenient self.
“Hirsch anoints his rampaging son ‘King of the Sudden Impulse / Lord of the Torrent / Emperor of the Impestuous,’ looks to other poets who lost children, and presents an explicit case study of his son’s diabolical illness and attempted treatments. His lightning-lit portrait of and surging lament for his hurricane of a son is a courageous, generous, and reverberating epic of fatherly love and mourning.”
—Donna Seaman, in a starred review for BOOKLIST