As a young woman, Robyn Davidson set out on an ambitious journey: to cross Australia from Alice Springs to the Indian Ocean on foot. Tracks is her extraordinary account of that trek, during which she endured sweltering heat and dangerous wildlife with only four camels and a dog for company. Despite the harsh conditions, the trip allowed Davidson to experience firsthand the Australian landscape that she loved so much. Below, we’ve paired five excerpts from Davidson’s memoir with photographs of the same locations. Use these scintillating snippets of travel writing to envision yourself in the Outback and enhance your conversation about the book—no plane ticket required!

Tracks is also soon to be a major motion picture starring Mia Wasikowska, so don’t forget to make a date to see the movie with your reading group! 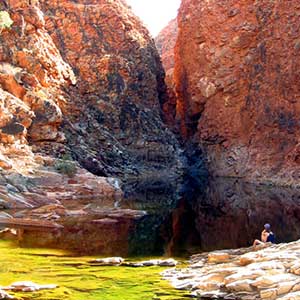 Located in the West MacDonnell National Park, this red-colored gorge is a popular camping and hiking destination. The water that fills the deep, narrow gap between the rocks is extremely cold. Redbank Gorge provides breathtaking views of Mount Sonder, which towers above it.

We spent the night and the whole next day in that impossibly beautiful place. We camped in silver sand, near the entrance of the water-filled gorge…. This gorge was only a couple of feet wide in places, with red and black cliffs that rose sheer out of the water for a hundred feet or more. Then it would open out into a gloomy cavern or a fissure where the sun shot spears of yellow into the green, transparent water [p. 105]. 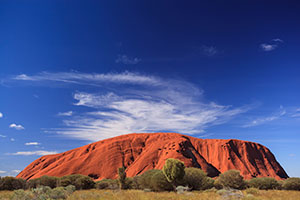 One of Australia’s most famous natural landmarks, Ayers Rock is a sandstone rock formation that stands about 1,140 feet high and is situated in the Northern Territory. The local Aboriginal people, who call it Uluṟu, consider it a sacred place.

And then I saw the thing. I was thunderstruck. I could not believe that blue form was real. It floated and mesmerized and shimmered and looked too big. It was indescribable…. I had not expected anything quite so weirdly, primevally beautiful…. The great monolithic rock was surrounded by fertile flats for a radius of half a mile which, because of the added run-off water, were covered in lush green feed and wildflowers so thick you couldn’t step between them. Then the dunes began, radiating away as far as the eye could see, orange fading into dusty blue [p. 133]. 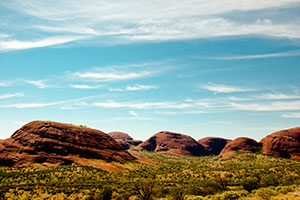 The Olgas are a group of more than 30 domed rock formations located about 16 miles from Uluru. The highest one is called Mount Olga (1,500 feet). The Pitjantjatjara name Kata Tjuta means “many heads,” and, like Uluru, the rocks have great cultural and religious value for the local Aboriginal people.

I had been looking forward to seeing the Olgas for years now. They were the sisters to Ayers Rock, and they looked like great red loaves of bread that some giant had dropped out of the sky. From the Rock, they were a cluster of lavender pebbles along the horizon…. We arrived at the Olgas that night in a tight silence, and set up camp directly beneath them. They glowed orange, then red, then iridescent pink, then purple, then turned into a black cut-out against glowing moonlight [p. 137-8]. 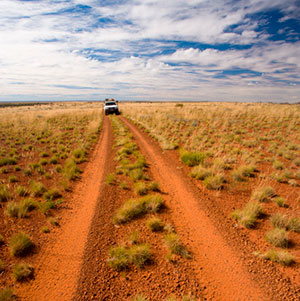 The Gunbarrel Highway is an isolated desert track that stretches on for 840 miles from east to west and passes through very remote territory, including the famously arid Gibson Desert. Originally built as a survey line, the road is now barely used by vehicles; covering it on foot is a true test to one’s survival skills as it requires the traveler to be self-sufficient with water and supplies.

The Gunbarrel Highway (Australians have such a strange sense of humour) was two parallel ruts that sometimes disappeared, but generally ran dead straight and due west through a most inhospitable waterless patch of nothing for hundreds of miles…. On either side of it, the endless rolling spinifex plains, all delicate fronds of gold and pink which would change as the sun rose to dull grey-green horror…. Because of the sameness of the plains, any different geographical feature was absurdly welcome. I would fall into raptures over some pitiful little gully, which could only be seen as attractive if you compared it with the country around it. One day I camped in a dust-bowl under a few straggly shadeless trees, which did more to my aesthetic senses than the Taj Mahal could do [p. 194-201]. 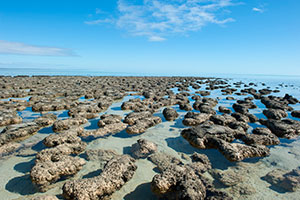 A seagrass sill blocked the entrance to the ocean, so that the water inside this vast, relatively shallow pool was hypersaline, a happy chance for the stromatolites, primitive life forms that had lived there for 500 million years. These strange primeval rocks rose up out of the water’s edge like a bunch of petrified Lon Chaneys. The beach itself was made up of tiny coquina shells, each as perfect and delicate as a baby’s fingernail. A hundred yards back from this loose shell was compacted shell, leached with lime until it formed a solid block that went down forty feet or more, which the locals cut up with pit saws to build their homes [p. 258].