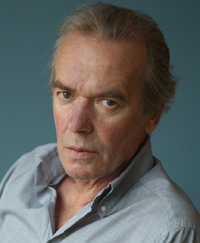 WHAT: ZONE OF INTEREST, a novel

WHY: “An audaciously satiric
and brilliantly realized tale.
“How to write fiction about the Holocaust that reveals in new and significant ways its systematic horror and impossible legacy? Amis accomplished this feat in Time’s Arrow, and now this brainy, intrepid, worldly, and virtuosic writer does it again in his fourteenth novel by ushering us into the poisoned minds of characters trapped in the death-spiral of the Final Solution.
“Well-connected Thomsen looks like a quintessential Aryan, yet seduction, not terror, is his calling. But surely it’s too risky, even for him, to woo Hannah, the statuesque wife of the repugnant concentration camp commandant with the ridiculous last name of Doll. Doll is slowly and inexorably going to pieces trying to manage the logistical nightmare of disposing of thousands of corpses. Szmul, a Jew, has been kept alive to work on this gruesome assembly line, a hell he endures by ‘bearing witness’ and, occasionally, saving lives. These three men take turns narrating Amis’ slyly sinister comedy of manners and romantic intrigue, a wily collision of content and form that neatly exposes the malignant madness at loose in the Third Reich.
“By focusing on the inner lives of reluctant perpetrators, Amis broaches the perpetual mystery of why people colluded in the monstrous efforts required for industrialized genocide. An audaciously satiric and brilliantly realized tale about personal angst and mass psychosis, and the immolation of self and soul.”
—Donna Seaman, in a starred review for BOOKLIST

“Chilling.
A haunting indictment of the people who willingly
bought the party line of racial purity and ethnic cleansing.”
—Barbara Love, in a starred review for LIBRARY JOURNAL

“An absolute soul-crusher of a book.
The brilliant latest from Martin Amis is an astoundingly bleak love story…He took on the Holocaust obliquely in Time’s Arrow. Here he goes at it straight, and the result is devastating.” —PUBLISHERS WEEKLY, a starred review 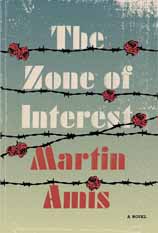 From the beginning of the book: I was no stranger to the flash of lightning; I was no stranger to the thunderbolt. Enviably experienced in these matters, I was no stranger to the cloudburst–the cloudburst, and then the sunshine and the rainbow. She was coming back from the Old Town with her two daughters, and they were already well within the Zone of Interest. Up ahead, waiting to receive them stretched an avenue–almost a colonnade–of maples, their branches and lobed leaves interlocking overhead. A late afternoon in midsummer, with minutely glinting midges…My notebook lay open on a tree stump, and the breeze was flicking inquisitively through its pages.