Novels in Translation to Read with Your Book Club 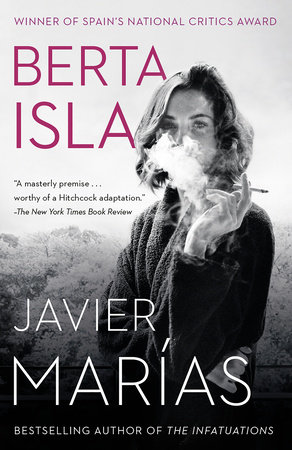 Fiction in translation is a treasure trove for reading groups to explore. Books published internationally expose us to the experiences and worldviews of people from different cultures, but works originally published in an author’s native language go one step further. They broaden our horizons by introducing us to different literary traditions, and offer exciting opportunities for comparison. For example, read Berta Isla by Spanish author Javier Marías along with a suspenseful thriller by an English-language writer and compare their stories and technique?

To whet your appetite, we’ve selected five novels that hail from Spain, France, Japan, Turkey, and Germany, and represent some of the most accomplished literary voices from around the globe. Fluent in one of the above foreign languages? We challenge you to read the original work alongside the English translation, and share the experience with your group!

Part spy thriller, part domestic drama, this enchanting novel offers peerless insight into the most shadowed corners of the human soul. When Berta Isla was a schoolgirl, she decided she would marry Tomás Nevinson–the dashing half-Spanish, half-English boy in her class with an extraordinary gift for languages. But when Tomás returns to Madrid from his studies at Oxford, he is a changed man. Unbeknownst to her, he has been approached by an agent from the British intelligence services, and he has unwittingly set in motion events that will derail forever the life they had planned. Berta Isla is a novel of love and truth, fear and secrecy, buried identities, and the destinies we bring upon ourselves.

In this enchanting tale about the magic of reading (in translation!) and the wonder of romantic awakening, two hapless city boys are exiled to a remote mountain village for re-education during China’s infamous Cultural Revolution. There they meet the daughter of the local tailor and discover a hidden stash of Western classics in Chinese translation. As they flirt with the seamstress and secretly devour these banned works, the two friends find transit from their grim surroundings to worlds they never imagined.

One can hardly talk about novels in translation without mentioning Japanese sensation Haruki Murakami. And there’s no better introduction to his body of work than Kafka on the Shore, a novel powered by two remarkable characters: a teenage boy, Kafka Tamura, who runs away from home either to escape a gruesome oedipal prophecy or to search for his long-missing mother and sister; and an aging simpleton called Nakata, who never recovered from a wartime affliction and now is drawn toward Kafka for reasons that, like the most basic activities of daily life, he cannot fathom.

As their paths converge, and the reasons for that convergence become clear, Haruki Murakami enfolds readers in a world where cats talk, fish fall from the sky, and spirits slip out of their bodies to make love or commit murder.

Translated from the Turkish by Maureen Freely

In this masterful but disquieting novel—combining elements of dread, yearning, identity, religion, and intrigue—an exiled poet named Ka returns to Turkey and travels to the forlorn city of Kars. His ostensible purpose is to report on a wave of suicides among religious girls forbidden to wear their head-scarves. But Ka is also drawn by his memories of the radiant Ipek, now recently divorced. Amid blanketing snowfall and universal suspicion, Ka finds himself pursued by figures ranging from Ipek’s ex-husband to a charismatic terrorist. A lost gift returns with ecstatic suddenness. A theatrical evening climaxes in a massacre. And finding god may be the prelude to losing everything else. Touching, slyly comic, and humming with cerebral suspense, Snow is of immense relevance to our times.

Translated from the German by John E. Woods

An acclaimed bestseller and international sensation, Patrick Süskind’s classic novel provokes a terrifying examination of what happens when one man’s indulgence in his greatest passion—his sense of smell—leads to murder. In the slums of eighteenth-century France, the infant Jean-Baptiste Grenouille is born with one sublime gift—an absolute sense of smell. As a boy, he lives to decipher the odors of Paris, and apprentices himself to a prominent perfumer who teaches him the ancient art of mixing precious oils and herbs. But Grenouille is not satisfied to stop there, and he becomes obsessed with capturing the smells of different objects, until one day he catches a hint of a scent that will drive him on an ever-more-terrifying quest to create the “ultimate perfume”—the scent of a beautiful young virgin.

The Infatuations by Javier Marías

Translated from the Spanish by Margaret Jull Costa

In a deliciously suspenseful novel that abounds in twists and turns, Javier Marías introduces María Dolz, an editor at a Madrid publishing house. Each day before work María stops at the same café. There she finds herself drawn to a couple who is also there every morning. Observing their seemingly perfect life helps her escape the listlessness of her own. But when the man is brutally murdered and María approaches the widow to offer her condolences, what began as mere observation turns into an increasingly complicated entanglement. Invited into the widow’s home, she meets—and falls in love with—a man who sheds disturbing new light on the crime. As María recounts this story, we are given a murder mystery brilliantly encased in a metaphysical enquiry, a novel that grapples with questions of love and death, chance and coincidence, and above all, with the slippery essence of the truth and how it is told.