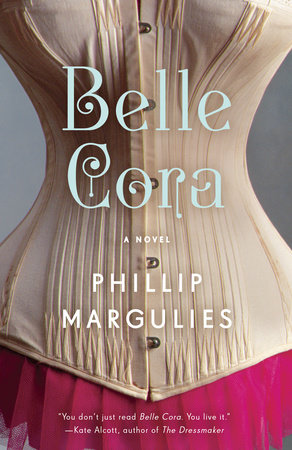 The best literary characters are so vivid and lifelike, their thoughts and struggles so resonant and engrossing, that you may forget they were in fact hatched in the mind of a writer. The muse descended upon author Phillip Margulies haphazardly, after he came across a curious anecdote about a San Francisco madam in the pages of a history book. The kernel of an idea grew and gradually bloomed into the full-fledged narrative that imagines her life story, the novel Belle Cora. Recounting her trials and tribulations against the turbulent backdrop of nineteenth-century America, the novel will take you on a rollicking journey from the tip of Manhattan to rural upstate New York and Gold Rush–era San Francisco. Read on for Margulies’s full account of how he developed his enigmatic Belle into the unforgettable heroine whose actions will make you gasp, cover your eyes, but also smile, laugh, and maybe shed a few tears.

When I think of the genesis of Belle Cora, it frightens me a little; it so easily never could have happened. About twelve years ago, when my wife’s friend Norman left New York City, he bequeathed to us his random-looking collection of mostly unread books. A few years later our family went on vacation. At the last minute I grabbed a couple of Norman’s books, and we drove to the Frost Valley YMCA camp in Claryville, New York, where the things I remember best are, one, my son identifying by name all the unusual mushrooms in the woods, and two, the enormous meals served, following a prayer, in the vast high school–style cafeteria. If we had not known Norman, and he hadn’t moved, and I hadn’t packed so haphazardly, I doubt I would ever have read Frontier Women: The Trans-Mississippi West, 1840-1880, by Julie Roy Jeffrey.

I found it interesting, though. On page 137, to illustrate the crucial role women played in the reform movements of the time, Jeffrey mentions a trivial argument that took place in a San Francisco theater. The year was 1855.  On one side of the dispute was Mrs. Sarah Richardson, the wife of a U.S. Marshal. On the other side was a parlor-house madam named Belle Cora.  Mrs. Richardson, the wife, demanded that Belle, the hussy, leave the theater at once. If this had happened back East, the wife would have gotten her way. It would have gone without saying that a respectable woman should not have to abide the company of a whore. But in San Francisco, just a few years earlier, women had been so scarce that men removed their hats when they saw a prostitute. Then they would carry her in their arms, tenderly, gallantly, chastely across the mud of the unpaved streets, deposit her on the other side, doff their hats again, and continue on their way. Appealing to the vestiges of this special local morality, and the fact that she was very rich, and actually one of the city’s leading citizens, Belle stood her ground, and the theater management took her side. We know about this incident because two days later Belle’s lover, an Italian gambler, was arrested for the murder of Mrs. Richardson’s husband.

The story spoke to me. It was like a little parable about shame. Belle was a madam and had been a prostitute. She had come to a place where, temporarily, people didn’t see any shame in that. She must have felt very free and strong. But now, like luggage that arrives late, the good Christian women had come west, bringing their values with them; shame was back.

I sat up in my bunk—since it was an actual camp, we had bunks instead of beds—and began making notes with a blunt red pencil on a yellow pad. I wrote more on my laptop in the lounge the next day, and more at a corner table of my neighborhood Starbucks when I got back to New York City.

To give this story the breadth and scope of a novel, I took liberties with the few facts that have come down to us about Belle’s early life. I gave her middle-class origins, so she could fall further and harder, and a wild younger brother for whom she feels responsible and who is always dragging her into dangerous situations. Then I orphaned them both and brought them to their uncle’s miserable upstate New York farm where you make your own soap out of the fireplace ashes and it’s for washing clothes, not faces or bodies. Mindful that my theme was shame, and that shame is about what other people think, I made both of Belle’s childhood families strict moralists, but with different moral codes. In her first family Belle is a dutiful little girl. In her second family, though she hasn’t changed much, they think she’s lazy and wicked. While she’s living on the farm, she meets the love of her life, a man who is insufferably good. She wants him to understand her, yet as life goes on and she piles one crime onto another, she can never bring herself to tell him everything.

I could not begin until I had the right tone, so my most important early decision was to cast Belle Cora as a fictitious memoir, so frank that it caused a scandal when it first appeared, and could not be published “complete and unexpurgated” in the United States until the 1960s. Since my Belle is supposedly writing in the early 1900s, I felt that I had permission to give her a supple fin de siècle narrative voice that could be tough like Stephen Crane or decadent like Oscar Wilde, and a scent of decaying roses could hang over everything.

Like most memoirists, Belle can’t help trying to put herself in a good light. She knows we can’t exonerate her unless we have the facts, so her defenses shape themselves as arguments rather than as outright lies. Still, there are secrets she tries to keep even from us, and we have to guess at them.

I lived with her for eight years and I miss her terribly.