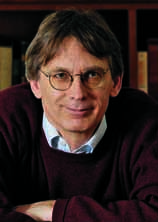 WHAT: HITLER’S FIRST VICTIMS: The Quest for Justice

WHERE: This story takes place Germany

WHY: “An important addition to Holocaust collections.
“Ryback here examines an early but enormously significant episode in the evolution of the Nazi program of genocide. In the spring of 1933, four Jewish men were summarily executed after they supposedly attempted to escape from the newly opened concentration camp near Dachau in southern Germany. Given the later enormity of Nazi murders, one might have expected these killings to be ignored. But in 1933 the Nazis were newly empowered and far from secure. Theirs was not yet a totalitarian regime.
“A local public prosecutor, Joseph Hartinger, followed procedure and investigated the case. He was, at first glance, an unlikely crusader. He was 39, a political conservative with virtually no experience in investigating murders. Despite the urging of his superiors to bury the case, Hartinger wouldn’t relent. Full justice for the victims could not be achieved, but the camp commandant was dismissed, and killing of Jews ceased temporarily.
“Ryback poses the troubling and probably unanswerable question, Could, at that early date, a similarly decent stand taken by more Germans, within and outside the government, have delayed, modified, or even stopped the onset of genocide?”
—Jay Freeman, in a starred review for BOOKLIST 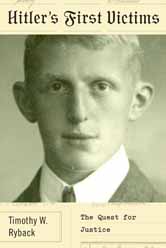 From the beginning of the book: Thursday morning of Easter Week 1933, April 13, saw clearing skies that held much promise for the upcoming holiday weekend. Mild temperatures were foreseen for Bavaria as they were throughout southern Germany, with a few rain showers predicted for Friday, but brilliant, sunny skies for the Easter weekend. Previous generations hailed such days as Kaiserwetter, weather fit for a kaiser, a playful gibe at the former monarch’s father, who appeared en plein air only when sufficient sunlight permitted his presence to be recorded by photographers. In the spring of 1933, some now spoke in higher-spirited and more reverential tones of Führerwetter. It was Adolf Hitler’s first spring as chancellor.