The Georgetown Set by Gregg Herken

A fascinating, behind-the-scenes history of postwar Washington—a rich and colorful portrait of the close-knit group of journalists, spies, and government officials who waged the Cold War over cocktails and dinner.

In the years after World War II, Georgetown’s leafy streets were home to an unlikely group of Cold Warriors: a coterie of affluent, well-educated, and connected civilians who helped steer American strategy from the Marshall Plan through McCarthyism, Watergate, and the endgame of Vietnam. The Georgetown set included Phil and Kay Graham, husband-and-wife publishers ofThe Washington Post; Joe and Stewart Alsop, odd-couple brothers who were among the country’s premier political pundits; Frank Wisner, a driven, manic-depressive lawyer in charge of CIA covert operations; and a host of other diplomats, spies, and scholars responsible for crafting America’s response to the Soviet Union from Truman to Reagan.

This was a smaller, cozier Washington—utterly unlike today’s capital—where presidents made foreign policy in consultation with reporters and professors over martinis and hors d’oeuvres, and columnists like the Alsops promoted those policies in the next day’s newspapers.  Together, they navigated the perilous years of the Cold War, yielding triumphs—and tragedies—with very real consequences for present-day America and the world.

Event Timeline for The Georgetown Set 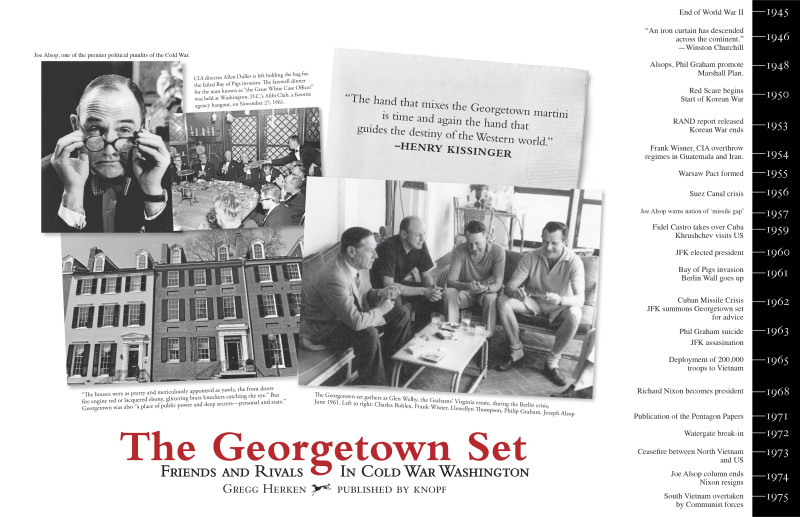