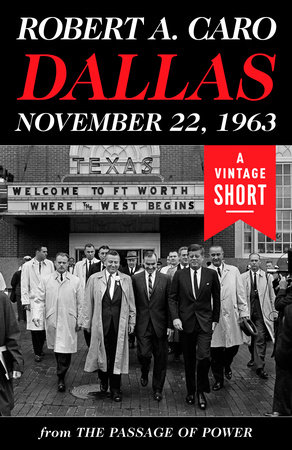 Fifty-one years ago tomorrow, at 12:29 p.m., the sharp, cracking sound of gunshots pierced the air as the open presidential limousine passed Dallas’s Dealey Plaza. John F. Kennedy, the Thirty-fifth President of the United States, was struck down; he would be declared dead less than an hour later. This shocking death plunged the country into a state of sorrow and disbelief, leaving an indelible mark on the American people. To commemorate the anniversary of JFK’s assassination, we’re rereading Robert A. Caro’s in-depth account of that tragic day, the eBook short Dallas, November 22, 1963, taken from his brilliant and bestselling The Passage of Power.

The two-time Pulitzer Prize–winning author reports the incident with startling details. Just as scandals that might end his career are about to break over Lyndon Johnson’s head, the motorcade containing the presidential party is making its slow and triumphant way along the streets of Dallas. In this passage from Dallas, November 22, 1963, Caro captures the exuberance of the crowd, just moments before the fatal shots are fired:

As the procession drove farther into the canyon, the noise swelled and deepened, becoming louder and louder so that the motorcade was driving through a canyon of cheers. Every time the President waved, the crowd on the sidewalk surged toward him, pressing back the lines of policemen, so that the passage for the cars grew narrower, and the lead car was forced to reduce speed, from twenty miles an hour, to fifteen, to ten, to five. Every time Jackie waved a hand in its white glove, shrieks of “Jackie!” filled the air. As the tall governor [John Connally] with the leonine head of gray hair waved his big Stetson, the cheers swelled for him, too. The four passengers in the presidential limousine kept smiling at each other in delight. “Mr. President, you certainly can’t say that Dallas doesn’t love you!” Nellie Connally said; the President’s “eyes met mine and his smile got even wider,” Mrs. Connally was to recall.

JFK’s words in response to Mrs. Connally were to be his last…. In Caro’s breathtakingly vivid narrative, from the Vice President’s perspective we are witness to the assassination, the procession speeding to Parkland Memorial Hospital, the moment when Kennedy aide Lawrence O’Donnell tells Johnson “He’s gone,” and Johnson’s iconic swearing in on Air Force One. Compelling and timely, Dallas, November 22, 1963 memorializes an American tragedy in a subway-ride worth of reading.