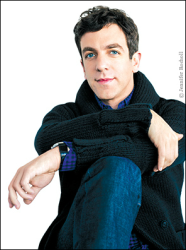 He regaled us with his charm in the role of Ryan, nickname “The Temp,” on the Emmy Award–winning hit TV show The Office, where he was also a writer, director, and executive producer. He is acclaimed for his standup comedy and his performances in motion pictures. Now, B.J. Novak has taken the literary world by storm with his electrifying, New York Times–bestselling debut story collection, One More Thing.

As befits one of America’s best comedic voices, Novak’s fiction is riveting and endlessly entertaining. As Michiko Kakutani proclaims in The New York Times, “Novak is a funny writer with a great ear, but also a genuine storyteller with an observant eye and finely tuned emotional radar.”

To mark the paperback release of One More Thing, B.J. Novak is visiting several US cities this February. Click through the links below to learn more about each event and purchase tickets.