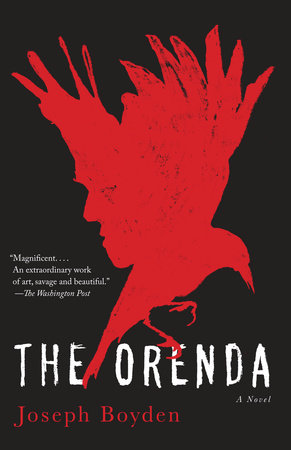 The Washington Post calls it “magnificent” and “an extraordinary work of art.” New York Times bestselling author of The Son, Philipp Meyer, proclaims that it’s “destined to be a classic.” With no shortage of literary admirers, Joseph Boyden’s The Orenda—an epic saga about the first encounters between Jesuit missionaries and the native tribes of Canada—presents the perfect blend of history and storytelling mastery. Who better to set the stage for your book club’s discussion of this riveting novel than its editor, Knopf’s Gary Fisketjon? Read on to find out what to expect from The Orenda—through the eyes of one of its biggest supporters.

I’ve wanted to publish Joseph Boyden ever since I read his first novel, Three Day Road, which is about two young Cree men who became famous snipers in the Great War. Another publisher denied me the pleasure, but I followed this extraordinarily talented author through a second novel, Through Black Spruce, and leapt at the chance to publish his third. The Orenda is a masterful epic whose subject is the conflict that formed this entire continent. In the early seventeenth century, well before there was a United States of America or a Canada, there were, however, two vast powers operating from the center of it: the Huron and Iroquois empires, each comprised of five distinct tribal nations ruling vast stretches of what would later become two different countries. The Orenda is the best, most compelling first-contact story I’ve ever read, with French Jesuits seeking to convert those who provide their nation with a fortune in furs and hoping to avoid being captured by others who would offer only an excruciating death.

But this isn’t a history book. Rather, it’s the story of three remarkable people who embody and redefine the encounter between European and aboriginal people that resonates so strongly to this very day. Here is where we all come from, and what we are marked by, and it provides endless opportunities to understand our countless generations on this land, as well as ourselves, better and more clearly. Over the past year, my conversations about this novel have amounted to not hours but days. As Justus Joseph, one of my favorite booksellers, at Elliott Bay in Seattle, put it: “A literary masterpiece that immerses readers in a past to be reconsidered, but finds its true power in illuminating our present.”

I very much hope you will soon find yourself talking about The Orenda with your friends, since this is a book that keeps on giving.