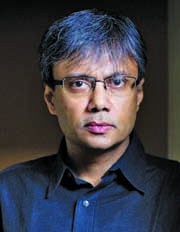 WHAT: ODYSSEUS ABROAD, a novel

WHY: “Mesmerizing…
“A meandering, sometimes mesmerizing quasi-novel about two Indian men living separately in London in 1985 and taking one of their regular walks together while memories arise and intrude.
“Chaudhuri deploys prose that has been described as Proustian in a plotless excursion with Joycean elements. It occupies one day yet has ramifications through several branches of a family tree across three generations. The title and some chapters refer to characters or elements from The Odyssey, while playful allusions to Ulysses dot the book.
“The first half of the narrative follows dyspeptic 22-year-old Ananda, a singer, so-so student at University College London and aspiring poet with a weakness for Philip Larkin. He ponders his noisy neighbors, tutors, sexual frustration and homesickness piqued by his formidable mother’s recent visit. He takes comfort in weekly constitutionals with his uncle, the dominant figure of the book’s second half.
“Radhesh is wealthy, though he retired one rung shy of his corporate goal, and is a lifetime short of losing his virginity. He lives in a modest flat and dispenses largess to relatives and a feckless neighbor. He played matchmaker as the brother of Ananda’s mother and the best friend of her husband-to-be. Radhesh and Ananda enjoy a prickly affection that stems from the nephew’s penury, their love of music, and the ties of heart and tongue to the homeland. Chaudhuri sprinkles Bengali words throughout the text—including Radhesh’s sad refrain, translated as ‘There’s a covering of moss on my heart.’
“Like Joyce, Chaudhuri recognizes that the seemingly artless rhythms and repetitions of daily life can have, in thoughtful hands, the depth and breadth of true art.”
—KIRKUS, a starred review 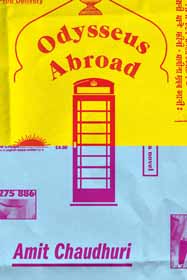 From the beginning of the book: He got up around nine o’clock with the usual feeling of dread. He threw off the duvet. Still unused to being vertical, he pounded the pillow and the sheet to ensure he’d dislodged strands of hair as well as the micro-organisms that subsisted on such surfaces but were invisible to the naked eye. He straightened the duvet, tugging at it till it was symmetrical on each side. He smoothed the sheet, patting it but skimming the starchy bit — a shiny patch of dried semen, already quite old — on the right flank of where he’d lain.