Novel Beginnings: A Conversation with the Author and the Editor of The Empire of the Senses 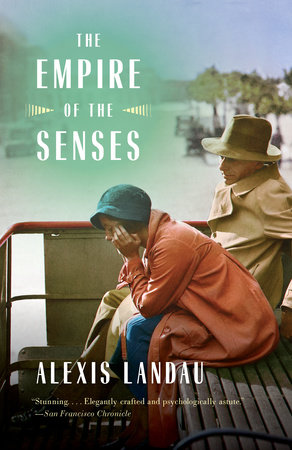 It takes talent, a lot of painstaking work, and a little bit of magic to bring a great book into the world. Such was the case for Alexis Landau’s debut historical novel The Empire of the Senses, a gorgeously written story of family, love, and war that caught our attention at Reading Group Center. To satisfy our curiosity and get an insider’s perspective on the creative process, we peppered Landau and her Pantheon editor, Deborah Garrison, with questions about the novel’s genesis, their collaboration, the challenges of writing/editing historical fiction, and much more!

Reading Group Center: Alexis, what was the initial spark for The Empire of the Senses? Why did you decide to tell this particular story as your debut novel?

Alexis Landau: In 2007, the Metropolitan Museum of Art had an exhibit called Glitter and Doom about the artists who were working in Berlin in the 1920s and 1930s, such as Otto Dix and Max Beckmann. This was always my favorite period of art history, and during the exhibit, while viewing all the paintings in one place and reading information on the people who influenced the painters as well as about the painters themselves, I became so swept up in it that I thought, “I have to write a novel about this time and place—such an intense, foreboding but also incredibly creative period in European history.”

Then what I’d call the second starting point occurred about two years later, during my time as a graduate student in English Literature and Creative Writing at USC—I had to choose a critical field of interest that was separate from my creative work, and I became increasingly interested in the idea of Jewish identity and assimilation during the interwar period. It seemed crucial to understand what it meant to be Jewish before the Holocaust, given how afterward, and after the birth of Israel, Jewish identity underwent so much change and redefinition.

I remember very clearly meeting with my advisor. I didn’t even know if I would be allowed to focus on the interwar period because it didn’t feel as though it was a real area of study. But my advisor was really supportive and said: “Yes! You can do that. That sounds amazing.” So I started delving into the work of writers such as Franz Kafka and Joseph Roth, and I ended up focusing on Irène Némirovsky, the author of Suite Française. No one had heard of her at that time, not even in my department, which was another reason why I wanted to write about her. Her circumstances in terms of being Jewish and in terms of being highly assimilated and well off—cultural trappings similar to those I planned to give to Lev (the protagonist of Empire of the Senses)—increased my interest in her life as a Russian Jewish writer living in Paris between the wars. Also, in terms of placing the beginning the book at the start of World War I and its ending  in 1928, I wanted to focus on this time period not only because of the explosion of art and creativity, but also because during this time in Berlin especially, there were so many forces undermining the status quo, in terms of sexuality and gender, not to forget the intense political climate. I was excited to convey all of these intersecting and sometimes conflicting cultural currents through the characters and the choices they make.

RGC: Deb, tell us about the first time you read Alexis’s manuscript. What made you want to work on it?

Deborah Garrison: I think what first drew my attention to the manuscript was how developed and fully realized Lev’s world was in the first third of the book. It is incredibly rich, and the love story with Leah is fascinating. But then the [first] war is over in the story, he has had to leave Leah on the Eastern front to return home to Berlin, and I thought to myself, “That was already quite a story—what on earth is she going to do for another 200 pages?” And there was so much more—the book had only just begun, and the life back in Berlin, the story of Lev’s children, was just as fully realized as the first section, and was fascinating to me. There was just too much good stuff in this novel not to want to work on it!

RGC: Can you describe the editorial process? How did your author/editor relationship help shape the finished book that we hold in our hands today?

DG: It felt to me very natural and easy. Though Alexis is a first-book author, she seemed to get right away that editing is a conversation, and we went back and forth about various scenes, ideas for cuts or additions, etc. We shared concerns about pacing and also about adjusting the pace without losing any crucial moments. So much of this book lives in the small moments, and they need to be allowed to breathe and to unfold. We wanted the book to read along at a nice pace, but it’s also not to be rushed—it works through the accumulation of detail and the deepening of layers of experience and layers of points of view. Alexis was very responsive, knew where the book’s strengths were, and she made my job easy.

AL: I have to say it was seamless—I always felt that I was on the same wavelength as Deb. There were memorable suggestions she made about Franz’s character—Lev’s son, who ends up joining the early Nazi movement despite his father’s Jewishness—as well as cutting out a vital piece of information early on about a character, and both times, after thinking on it for about two minutes, I agreed with her, and it felt entirely right. When we brainstormed over the phone, she inspired me to come up with just the right phrase, or idea about how to edit something, because she is so generous and supportive of the writing. This openness led to such a wonderful creative flow between us.

RGC: What is the most challenging about writing/editing historical fiction? How do you make decisions about what needs to be true to fact, and what can be fictionalized?

AL: Getting the tone right—just in the way the characters view the world and how they speak and act and even treat physical objects around them. Also, in terms of language, I had to be careful, not just with how the characters spoke, but with how the narration described their world, because I didn’t want any dissonance to exist between the narrative voice and the character’s voices. Of course I am coming at it from a modern standpoint, so I kept reminding myself that not only was I writing about Berlin in the 1920s but I was also writing from that perspective as well. What needed to be accurate were all the details—the type of clothing, food, music, books, the types of conversations people were having—essentially, all of the cultural trappings —but then how the characters felt about these ideas and internalized them was fictionalized.

DG: I trusted Alexis, since she had done so much research. She wanted to be as accurate as possible, and she continued her diligent fact-checking throughout, but I never felt the book read like research. The characters are so warm and alive on the page. So I didn’t have concerns about accuracy, nor about the opposite, which can be worse—too much accuracy and not enough imagination!

RGC: Alexis, you mentioned that you wrote your PhD dissertation on Irène Némirovsky. How did your knowledge of her life and fiction play into the formulation of and research for this novel?

AL: Thinking about Némirovsky’s life as a highly assimilated Russian Jewish writer living in Paris between the wars really made me see how unimaginable the “final solution” was to Western European Jews, especially those of her social class and time period (and Lev is definitely an example of this). Even though my book ends in 1928, both Némirovsky and Lev both experience anti-Semitism and discrimination to a certain extent, but they could never conceptualize how these relatively minor outbursts of anti-Semitism would evolve into the systematic obliteration of their ethnicity, religion, and cultural heritage. Understanding this was crucial for me as I was writing about Lev’s assimilated existence in Berlin as being at a historical moment of creativity and opportunity for Germany as well as for him on a personal level.

RGC:  Deb, there’s no dearth of historical novels set during the world wars. How is The Empire of the Senses different? What makes it unique?

DG: For me the uniqueness comes in the portrayal of this family between the wars. This is not a Holocaust novel. It is not even really a war novel. Yet it reveals so much about both of those things and deepens our understanding of the First World War, and certainly of the brew that led to the Holocaust and the Second World War. And the inner demands, motivations of each family member—Lev’s duty to return to family after his war experiences, Vicki’s Jazz Age rebelliousness and her love for Geza, Franz’s pull toward the Brown Shirt movement, even Josefine’s desire to continue living in the good old days of Empire—are powerful and individual, yet so telling about the larger canvas of that time and the forces that were working on them.

RGC: Can you both talk about one particular character or scene from The Empire of the Senses that resonates with you, and why?

AL: Vicki, Lev’s daughter, has left a lasting mark on me because she embodies so much of the glittering hope and inspiration of that time period in Berlin. She also chooses a drastically different path from our initial expectations of her, which touches on one of the main themes of my work—how malleable and changeable identity is, despite the illusion of fully knowing ourselves and others.

DG: For me it is also the character of Vicki and the small moments that lead to her growing up—looking out the window of the ballet studio during class, pretending to study in the library when Geza is there and sneaking glances, figuring out how to be in love for the first time. It’s always true that, in the midst of historical ugliness and crisis, life goes on, and her character lives and grows and changes through this period in both very ordinary and extraordinary ways. This is true of all of the characters, but she was “my” character in this book!

(Note: This interview was originally published in conjunction with the hardcover release.)