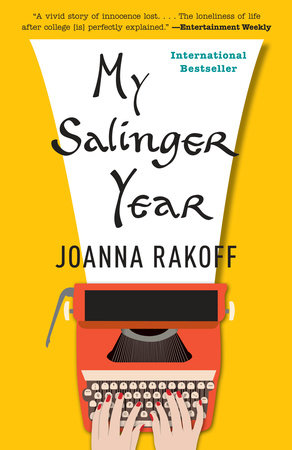 Dewy-eyed and having just left grad school to focus on her poetry, in 1996 Joanna Rakoff started working as an assistant at one of the most prestigious New York City literary agencies. There, she spent a year doing office work (with nothing but a Dictaphone and an old-school typewriter) for the no-nonsense, hard-edged agency head. Rakoff’s internationally bestselling memoir recounts the events of that year, exposing the workings of the literary world à la The Devil Wears Prada and giving us a unique look at one of the most celebrated—and private—American writers, her boss’s most important client. In this excerpt, Joanna discovers the identity of that writer, whom people in the agency lovingly call “Jerry”—a revelation that will irrevocably change her life.

As I pulled out my chair to sit down, my boss appeared in the doorway to her office. “Oh, good, you’re back,” she said. “Come in and have a seat. We have some things to talk about.”

Glancing sadly at my sandwich, wrapped tightly in white butcher paper, I walked into her office and sat down in one of the straight- backed chairs that faced her desk.

“So,” she said, settling in her own chair, behind the vast expanse of her desk. “We need to talk about Jerry.”

I nodded, though I had no idea who Jerry was. “People are going to call and ask for his address, his phone number. They’re going to ask you to put them in touch with him. Or me.” She laughed at the ridiculousness of this. “Reporters will call. Students. Graduate students.” She rolled her eyes.

“They’ll say they want to interview him or give him a prize or an honorary degree or who knows what. Producers will call about the film rights. They’ll try to get around you. They may be very persuasive, very manipulative. But you must never”— behind those huge, heavy glasses her eyes narrowed and she leaned across the desk, like a caricature of a gangster, her voice taking on a frightening edge— “never, never, never give out his address or phone number. Don’t tell them anything. Don’t answer their questions. Just get off the phone as quickly as possible. Do you understand?”

“Never, ever, ever are you to give out his address or phone number.”

“I understand,” I told her, though I wasn’t sure I did, as I didn’t know who Jerry was. This was 1996 and the first Jerry that came to mind was Seinfeld, who presumably wasn’t a client of the Agency, though one never knew, I supposed.

“Okay,” she said, sitting back in her chair. “You understand. Now go. I’m going to take a look at your correspondence.” She gestured to the pile of letters I’d typed, neatly stacked on her desk. Seeing them, oddly, gave me a little rush of pride. They were so beautiful, that heavy yellow bond crowded with letters in inky black.

As I left her office, smoothing my skirt, I happened to glance at the bookcases directly to the right of her doorway, on the wall opposite the side of my desk that held the typewriter.

I’d been staring at that bookcase all day, staring at it without seeing it, so focused was I on my typing. The case held books in corresponding hues: mustard, maroon, turquoise, imprinted with bold black type. I’d seen these books countless times— in my parents’ bookcase and the English department closet at my high school, at every bookstore and library I’d ever visited, and, of course, in the hands of friends.

I’d never read them myself, due at first purely to happenstance, then to conscious choice. Books so ubiquitous on the contemporary bookshelf I barely noticed them: The Catcher in the Rye, Franny and Zooey, Nine Stories.

I’d reached my desk before it hit me.

Oh, I thought, that Jerry.