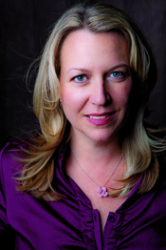 Cheryl Strayed’s words have inspired millions of readers around the world. They have been tattooed on bodies, needlepointed onto pillows, printed on mugs and t-shirts, and shared among readers as personal mantras. And now they will be collected into one volume and published by Knopf on October 27th. BRAVE ENOUGH will draw from the wide range of Strayed’s writings and hone in on more than 100 of her most popular quotes—quotes that capture her wisdom, courage, and outspoken humor.

“From the comic to the profound, the simple to the complex, the sorrowful to the ecstatic, the inspiring to the stern, whenever I need consolation or encouragement, a clear-eyed perspective or a swift kick in the pants—which is often—quotes are what I turn to,” said Strayed. “I think of quotes as mini-instruction manuals for the soul. It’s my appreciation for their very usefulness that compelled me to put together this book. Not because I believe in my own sagacity, but because I believe in the power of words to help us reset our intentions, clarify our thoughts, and create a counter-narrative to the voice of doubt many of us have murmuring in our heads. The one that says You can’t, you won’t, you shouldn’t have. Quotes, at their core, almost always shout Yes! [BRAVE ENOUGH] aims to be a book of yes.”

Strayed is the author of three previous books—her critically acclaimed debut novel, Torch, her groundbreaking memoir, Wild, and a collection of dazzlingly insightful “Dear Sugar” advice columns, Tiny Beautiful Things. She has been willing to share with readers the many twists and trials of her remarkable life, and her honesty, spirit, and ample supply of tough love have enabled many of them, even in their darkest hours, to put one foot in front of the other and be brave. Whether humorous or wise (and often both at once), Strayed’s words are anthems that remind us that we may inevitably make mistakes, but we can also do better, both for ourselves and for others. In BRAVE ENOUGH, Strayed urges readers toward the incredible capacity for love, compassion, forgiveness, and endurance that is within us all.

Cheryl Strayed is the author of the #1 New York Times best seller Wild: From Lost to Found on the Pacific Crest Trail, which became an Oscar-nominated film starring Reese Witherspoon; Tiny Beautiful Things: Advice on Love and Life from Dear Sugar, a national best seller now the basis of the WBUR podcast “Dear Sugar Radio,” co-hosted with Steve Almond; and Torch, her debut novel. Her books have been translated into forty languages, and her essays and other writings have appeared in numerous publications.