WHAT: VOYAGE OF THE SABLE VENUS and Other Poems

WHERE: The author was born in Compton, California; her family is from New Orleans. See her on tour.

WHY: “One of a kind.
“Robin Coste Lewis’s Voyage of the Sable Venus is an experimental tribute to a human history that embraces truth and adventure. She shows how cultures traverse terrains and comingle. These poignant poems, through a poetic excavation, unearth figures that make us question racial constructs. The body is at the center of this imagistic inquiry, and each line is a blind stitch in the psychological metrics of the whole. Lewis’s first collection, a detailed tapestry of ancient and modern behavior—names, dates, and emotional marginalia—is one of a kind.” —Yusef Komunyakaa

“Altogether new, open, experimental and ground-breaking.
Voyage of the Sable Venus reframes the black figure, most specifically the black female, by pointing out the borders of black beauty, black happiness, and black resilience in our canonical visual culture. Tender and masterful opening and closing poems bookend the archival, lyric masterwork, “Voyage of the Sable Venus,” at the center of the collection. This title poem upends the language of representation, collected from the cataloging of the black body in Western art. Robin Coste Lewis takes back depictions of the black feminine and refuses to land or hold down that which has always been alive and loving and lovely. Altogether new, open, experimental and ground-breaking, Lewis privileges real life in all its complications, surprises and triumphs over the frames that have locked down the scale of black womanhood.” —Claudia Rankine 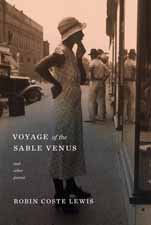