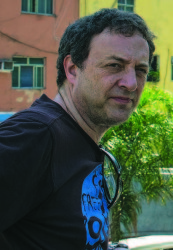 WHAT: NEMESIS:
One Man and the Battle for Rio

WHY: “A page-turning chronicle.
“The life and career of a favela don illustrates the larger challenges of a deeply impoverished, class-ridden Brazilian society. British author and former BBC Central Europe correspondent Glenny finds an inspiring subject in Antonio Francisco Bonfim Lopes, aka Nem, one of the most wanted drug running criminals in Rio de Janeiro, who has been imprisoned since 2011 in the high-security Campo Grande prison in Mato Grosso do Sul. Having interviewed him in prison multiple times over two years, the author vividly depicts the extraordinary career of this young don of the Rocinha favela—the largest of Rio’s hundreds of slum neighborhoods—with enormous subtlety and sympathy, filling in his story by interviewing his family, enemies, colleagues, and others.
“Rocinha — the size of a small city in which tens, possibly hundreds, of thousands of residents live ‘cheek by jowl’ with more middle-class districts of Ipanema, Leblon, and others — was adversely affected by the rise of the cocaine trafficking market in the 1980s, with drug lords taking turns running the favela economy, employing the gangsters, eliminating enemies, and generally keeping the peace with the Red Command.
“Having grown up in the favela, Nem was in his early 20s in 2000, a driver by trade and with a wife and sick daughter, when he solicited help from the current don, Lulu, borrowing money for his daughter’s care and thus indenturing himself with the Mafia. From working for Lulu’s ‘security’ to gradually taking on more responsibility, Nem rose above the internecine gangster wars in 2004 and 2005 to take command in Rocinha at the time of Brazil’s enormous economic surge and globalization. For five years, Nem ran the local welfare economy in relative harmony, until the military and civil police began a ‘pacification’ program to rid the city of the drug trade — and clean it up for the World Cup and the Olympics. Glenny does an admirable investigative job, delving deeply into the complicated causes and effects of Rio’s drug trafficking.”
—KIRKUS REVIEWS 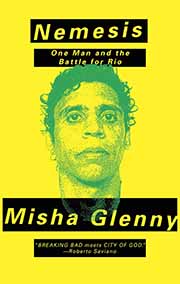 From the beginning of the book: From beneath the thick foliage of Rio’s Atlantic forest, a large dark Toyota Corolla snaked slowly up the hill. The sleek luxury car was surely a government or corporate vehicle. This was a rare sight in the slum of Rocinha. Aging vehicles ready to die — yes. Swarms of motorbike taxis — yes. Galumphing buses, which, defying the laws of physics, swung their backsides around hairpin bends — yes. But menacing flash executive cars with low-slung bodies and fat tires? They didn’t belong. In Rocinha, a thousand eyes silently scrutinize the unfamiliar as a matter of course.