The Real Wild West Explorers Who Inspired Into the Savage Country 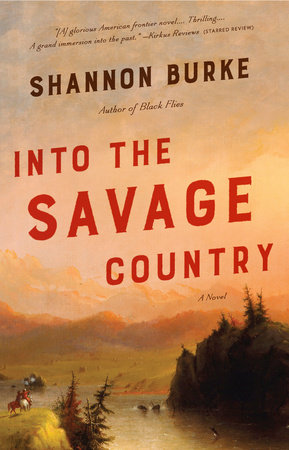 It’s no surprise that tales of the American West in the 1820s are having a moment. On the big screen, Leonardo DiCaprio won an Academy Award—finally!—for his portrayal of Hugh Glass, a trapper bent on revenge, in The Revenant. The fierce wilderness is an ideal dramatic setting, and the captivating adventures of fur trappers are rich fodder for any storyteller. For those who prefer their Wild West a little less gruesome, we’re happy to share Shannon Burke’s Into the Savage Country. At once a love story and a complex tale of survival, it is also a panoramic retelling of a crucial moment in American history. Below, the author discusses the real-life men who inspired his novel.

In the fall of 2007 I had just finished writing the second of two novels that took place in New York City, and I was rooting around for another subject. I had no real intent to write a historical novel, but in my haphazard reading I stumbled across some archives of the North American fur trappers, and particularly, the letters of General William Henry Ashley.

Ashley was a Brigadier General during the War of 1812 and later a member of Congress, but in 1824 he was the co-owner of the Rocky Mountain Fur Company and had the audacious plan to cross the Western plains in wintertime. Ashley left Fort Atkinson in eastern Nebraska in November and after a series of mishaps and incredible hardships arrived with his men at the western mountains in April 1825, just in time for the spring trapping season. Most of Ashley’s men went off to the drainages to trap. Ashley himself, having stumbled upon a large river, decided to “descend the river to some eligible point about one hundred miles below,” where he would establish a camp. The waterway that Ashley planned to navigate, and of which he was entirely ignorant, was the Green River.

“I embarked with six men on Thursday, the twenty-first of April, on board my newly made boat and began the descent of the river,” Ashley wrote. After what was less than a day General Ashley noted that his homemade boats were too “heavily burthened.” He stopped. He built bigger boats with what was available at hand. He started again, heading toward what is some of the most famous whitewater in the country, including Flaming Gorge and Red Canyon.

Amazingly, and with characteristic understatement and aplomb, Ashley managed to navigate the river for a hundred miles in makeshift boats. At that point Ashley had earned a well-deserved rest. He’d been on the march since November. He had crossed the plains and the continental divide in winter. And Ashley was no spring chicken. He was forty-six years old. But after establishing his camp a nearly incomprehensible thing happens: Ashley decided to keep going, and not because it was necessary, or for the future benefit of his company, but simply out of curiosity. Ashley navigated the whitewater of the Green River on crude boats in springtime, for fun, and only stopped because, as Ashley wrote, “the necessity of my unremitted attention to my business prevented me from gratifying a great desire to descend this river to the ocean, which I ultimately declined with the greatest reluctance.”

In a related instance that same year, Jim Bridger, twenty years old, was wintering with companions on the Bear River. Bridger and the other trappers were arguing about where the river went, as the knowledge of the topography of the West at that point was decidedly vague, so much so that in the Treaty of 1818, which was the final settlement of the War of 1812, the boundaries of the West, which were primarily established along mountains ranges, were in some cases uncertain, because the mountains, on the treaty, were put in the wrong place.

And so Bridger, having nothing better to do, said he would settle the dispute. He set off by himself into a hostile and completely unknown wilderness. He first traveled by bull boat and then on foot down to where the river emptied into a large body of water. By most estimates it took about a week of travel to get there. When he arrived at the large body of water he stuck his finger in and tasted it. The water was salty. Bridger walked back to tell his companions that he’d found the Pacific Ocean. He had of course found the Great Salt Lake, but his confusion only illuminates the pleasing fact that the terrain was totally unknown, and that those men, as they were well aware themselves, were not only trappers, but also explorers, perhaps the greatest explorers our country has ever known.

I went on to read about other figures in the trapping world: Jedediah Smith and his partner William Sublette, Jim Beckwourth, and Hugh Glass. I began reading trappers’ memoirs and trappers’ letters. I became fascinated with the politics of the time: the settlement of the war of 1812, the jostling with the British, French, Spanish, and Russians, the varied and fascinating native civilizations that still flourished relatively undisturbed at that time.

After about a year of reading I started traveling to the trapping lands, some of which are national forests now, and are still recognizable from descriptions in the journals. I camped out along rivers. I waded into streams. I visited the old forts. I tried to immerse myself in that world.

At that time I calculated I had spent more than two years in a tent. That figure is probably closer to three years now, and so I had some idea what it meant to go off into the wilderness. I envied the trappers. I admired them. And one day I wrote this sentence in my journal:

The year was 1825, the springtime, and was working along the waterfront in St. Louis when I received word that my father had died.

That sentence was the beginning of my journey with my narrator William Wyeth. The novel that sprung from this first sentence, Into the Savage Country, was meant to be an adventure, like White Fang or Treasure Island or Kidnapped or The Count of Monte Cristo. I wanted it to be an old-fashioned yarn that embodied the spirit of curiosity and adventurousness that had pleased me so much in the letters and memoirs of the trappers. It was a fun book to write, and I hope it satisfies and entertains whomever chooses to pick it up.

While the trappers’ journals and letters are wonderful historical documents, they don’t always make great general reading. In my explorations I read three books, all of which are extremely well written, and that I feel embody the spirit of their respective times. The three books are The Falcon by John Tanner, Life in the Rocky Mountains by Warren Angus Ferris, and The Oregon Trail by Francis Parkman.