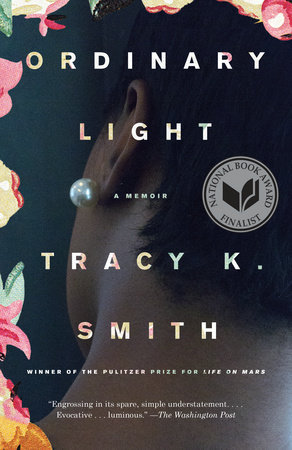 April is National Poetry Month so it’s the perfect time to share our favorite passages from the memoir of one of the most talented young poets of our time, Pulitzer Prize winner Tracy K. Smith. In Ordinary Light, a National Book Award finalist, Smith explores her own coming-of-age story and the meaning of home against a complex backdrop of race, faith, and family ties. Her lyrical language transcends the typical prose of a memoir, giving the reader that rare combination of exquisitely beautiful writing and wry insight into everyday life.

Honest, elegant, and filled with warm humor, Ordinary Light is not to be missed. Read on for our most loved pieces of the book and share your favorite on our Facebook page!

On the Magic of Writing Poetry:
“Wasn’t it strange that a poem, written in my vocabulary and as a result of my own thoughts or observations, could, when it was finished, manage to show me something I hadn’t already known? Sometimes, when I tried very hard to listen to what the poem I was writing was trying to tell me, I felt the way I imagined godly people felt when they were trying to discern God’s will. ‘Write this,’ the poem would sometimes consent to say, and I’d revel in a joy to rival the saints’ that Poetry—this mysterious presence I talked about and professed belief in—might truly be real.” (p. 309)

On Getting “The Talk” from Her Pre-Med Brother:
“We sat on two chairs next to the sliding glass door in the family room. Outside, it was sunny and cool but not cold, a bright California December morning, with dewdrops still on the grass and trees that clung to their leaves. Conrad did a good job of explaining how the sperm and egg meet without eliciting too much embarrassment. But he told me more than I wanted to know about a think called foreplay.” (p. 151)

On Social Pressures:
“Maybe Diane was a bully. Probably she was that catchall word that applied to most of us: insecure. She might also have sensed that, deep down, her friendship represented a social opportunity to me, that I hoped it might grant me permission to jump several social lanes to merge with Becca and her friends. Had Diane grown adept at sussing out that kind of opportunism? I told myself mine was hidden, but it turned somersaults in my stomach whenever Becca or someone like her acknowledged me. It’s funny. Where did I think all my discomfort—the social anxiety that left me, for the most part, without a single word in my mouth or head—would disappear to on the day Diane finally delivered me to the popular kids? At that point, would I just wave to her over my shoulder or look at her with such transparent intent that she’d understand that my use for her had vanished? Did she sense what I really wanted from her and choose to ignore it? Or did she know it was so impossible it didn’t matter, that’d never get past her, I’d never make it to her sister’s world.” (p. 191)

On the Benefits of Solitary Contemplation:
“As I set out from home each morning for campus, the cadence of my footfalls seemed to invite a new thought to take shape, and the twenty minutes it took for me to reach campus gave that thought the time to really get somewhere. Sometimes, it felt more like dreamtime, and I found that I’d worked my way through an idea or a memory it should have taken far longer to navigate.” (p. 295)

On Understanding:
“Waiting for Mom to brush her teeth and prepare for bed, I studied the pattern on the quilt in our room, trying to take it in as if my own story were stitched into its blocks. And as I breathed in the smells of the place, still strange, though less so by then, it struck me. There was so much I would never understand, so much that would never belong to me, not really. There were even parts of my mother that I might never fully get a handle on—aspects that had come to life upon her return here and that would go dormant again once we were back in California—but wasn’t there a way to see all of that as a good thing, to take it as proof that we are, all of us, made up of near infinite facets?” (p. 62)

On the Death of Her Mother:
“She left us at night. It had felt like night for a long time, the days at once short and ceaselessly long. November-dark. She’d been lifting her hand to signal for relief, a code we’d concocted once it became too much effort for her to speak and too difﬁcult for us to understand her when she did. When it became clear that it was taking everything out of her just to lift the arm, we told her to blink, a movement that, when you’re watching for it, becomes impossibly hard to discern. ‘Was that a blink?’ we’d ask when her eyelids just seemed to ripple or twitch. ‘Are you blinking, Mom? Was that a blink?’ until ﬁnally, she’d heave the lids up and let them thud back down to say, Yes, the pain weighs that much, and I am lying here, pinned beneath it. Do something.” (p. 3)