Getting it Wrong with Jane Smiley: An Exclusive Q&A 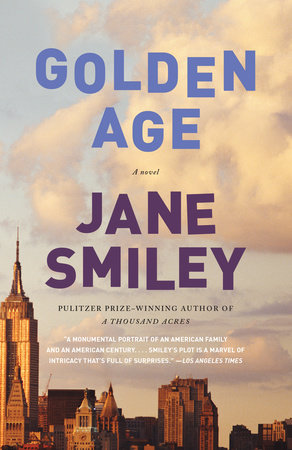 Jane Smiley’s been pretty busy lately. In just twelve months, she published the entirety of The Last Hundred Years Trilogy, a series that follows one family through the events of the last century. The focus of these books is three generations of the Langdon family, moving from an Iowa farm in 1920 to the complicated climate of the present. Praised for its ambition and heart, the trilogy (made up of Some Luck, Early Warning, and Golden Age) has won over tons of readers, including us! To celebrate the paperback publication of Golden Age, we got the chance to ask Jane Smiley a few questions about what it was like to write the series.

Reading Group Center: How would you describe The Last Hundred Years Trilogy in twenty-five words or fewer?

RGC: Golden Age has a heavy political focus and in the acknowledgments you even thank “the members of the U.S. for being so easy to satirize.” Given the popularity of shows like House of Cards and Veep, what do you think it is about politics that entrances an audience?

JS: There have always been political novels, like Anthony Trollope’s Palliser series. Novels are inherently political, and novelists like to explore the worlds that they live in.  But I think that we live in a world that is incomprehensible, and also enraging for a lot of citizens, and so it is tempting to investigate and tell stories about our world. For me, it was a case of “what is going on here?” The political establishment seems simultaneously corrupt and out to lunch, and at the same time, the general public seems to be getting more and more fractious. I think we live in dangerous times, but I don’t know that for sure. It seemed like an interesting idea to explore where we’ve come from.

RGC: The timeline of this novel brings the story into the present and moves forward into the future. Did you approach those chapters differently than the ones set in the past?

JS: I was more unsure of myself when I enter into the future, and so I thought about it and pondered it, and tried to extrapolate from recent events, but of course I was wrong! Did not foresee Trump. The future is always surprising until you look at it in the rearview mirror.

RGC: After writing this trilogy is there a particular decade or era that you found most fascinating? If you could choose any time period covered in the novels to have grown up in, when would it have been?

JS: I think the late forties were really interesting—all the events at the end of the Second World War and the beginning of the Cold War—but if I had grown up then, or even been an adult then, I wouldn’t have known what we now know about them. I truly enjoyed the research, and all of the information that has emerged. As for growing up, I grew up at just the right time for me—the fifties, sixties, seventies. Something new happening every time you turned around, and, of course, the Beatles! It was a great time to be an aspiring woman writer and I think I lucked out.

RGC: Imagine you’re part of a book club discussing Golden Age. What is a topic or question you’d like to pose to the group?